The Brexit race to the bottom 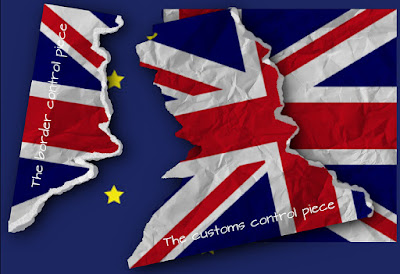 By the time this article pops up on the net, who knows what Brexit chaos might be unfolding. It is, however, worth being forewarned about what's been sneaked into place at the time of writing. As GM Watch points out, there's so much political upheaval in the UK and Europe, we risk "being so overwhelmed by the noise and sense of urgency that we miss what's really going on".

For example ...
If the UK wants to trade with the EU, it will have to maintain a level playing field, not undercut EU regulation (as no doubt America is poised to do to us given half a chance). One clever way to undercut EU regulation, while not appearing to do so, is to relegate key environmental protections to a list of accompanying political 'declarations': such declarations don't have the legal weight of an actual specific agreement.

PM Boris Johnston has already pledged to "liberate" the UK's biotech sector from the EU's perceivedly anti-GM regulation. Furthermore, opening the doors to GMOs has been suggested as key to enabling a quick trade agreement with the US. Many Statutory Instruments transfer powers currently held in Brussels to UK ministers. With regard to GM, this means that ministers will be able to change (weaken?) the rules on sampling and testing for the presence of GMOs and on allowable GM contamination in 'non-GM' food, feed and seed, all without proper political or public scrutiny.

Several telling pieces of legislation have slipped through undebated. For instance, GMO regulations are to be reviewed and revised every five years (starting September 2024), and these should prioritise, where possible, "less onerous regulatory provision".

Leaked documents in December 2019 confirmed that GM crop approvals and the labelling of GM food products are very much on the table for a possible trade deal with America.

Interestingly, one of the Statutory Instruments shifts responsibility for GM food safety, currently carried out by the European Food Safety Authority (EFSA), to the UK's devolved nations. It's not obvious why. None of these devolved bodies has the capacity to effectively replace the EFSA.


Perhaps the hope is that the new devolved regulators will be so overwhelmed by the shear volume of GM foods flooding in from America that these will simply fill up our supermarket shelves by default.

Such a fragmented approach to safety risks the chaos of our four countries each imposing different GM standards. On the other hand, the implications of devolved food, feed and crop safety regulation are that independence becomes more attractive and simpler to implement.


WHAT YOU CAN DO

At the end of the day, polls show that 82% of the British public are against a lowering of food standards, and support for GM remains low in the UK. If GM doesn't sell, the shops won't stock them. Use your 'people power'.

Sign the petition jointly prepared by Beyond GM and GM Freeze which calls on the Secretaries of State for the Environment, Food and Rural Affairs, for International Trade, for Exiting the European Union, and the Chairs of the Food Standards Agency and of Food Standards Scotland -

"to protect consumers' right to make an informed choice by retaining and enforcing the requirement to label food containing GM ingredients, throughout the UK.

Check it out at: https://donthide.gmfreeze.org/

It's worth signing up to GM freeze email updates and action alerts to ensure you don't miss the latest developments and opportunities to get your voice heard. You can do this at
https://www.gmfreeze.org/join_us/email-signup/