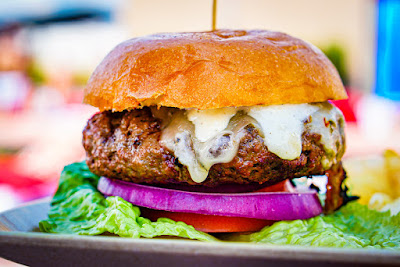 The 'Impossible' bleeding plant burger started out back in 2017 as textured wheat protein with fake soyabean 'blood' from GM yeast and some other stuff collectively described by its manufacturer, Impossible Foods, as "simple, all-natural ingredients" [1]. By 2019, Impossible Foods had realised their Impossible burgers weren't sufficiently beef-like and were unpopular with the gluten-intolerant sector of the population. The non-meat burgers were accordingly re-formulated with soya protein.

It seems, however, that sourcing sufficient quantities of affordable non-GM soya to suit its clean, green image and marketing aspirations proved impossible: Impossible Foods' answer was to switch to cheap and plentiful GM soya and hype its way out of the image problem [2].
In its promotional blog, Impossible Foods manages to stress the safety of GM soya twelve times within twenty-three short paragraphs, while the environmentally friendly message is plugged thirteen times. Readers of GM-free Scotland will be only too aware of the dependence of GM soya on extensive spraying with glyphosate herbicide and the repeated scientific alerts about damage to wildlife and human health from this chemical. At the time of writing, GM soya producer, Bayer, is facing more than 42,000 claims in the US courts from glyphosate users and innocent bystanders (two of the plaintiffs are children) now suffering from cancer. Tests comparing Impossible burgers with another brand of veggie burger found eleven times the effective* glyphosate contamination in the Impossible version. And, of course, the next generation of GM soya, engineered to tolerate other older herbicides, such as dicamba and 2,4-D with long track records of toxicity and ecosystem concerns, have barely reached the market yet.

*Effective levels of contamination include glyphosate plus its main derivative, AMPA.

The current interest in meat analogues is strongly driven by the perceived climate change impacts of animal farming. However, much of the data derives from intensive, grain-fed, industrial livestock systems and focuses on emissions only. The key role that pasture-based grazing systems (especially on marginal lands unsuitable for other uses) in sequestering carbon and promoting soil microbial diversity is ignored. For example, regenerative agriculture uses land management that avoids tillage and bare soil, integrates livestock, and fosters on-farm diversity. These practices rebuild soil organic matter and biodiversity, and thus enable soil to sequester more carbon than conventional, pesticide-laden soil.

Impossible Foods was quick to dismiss regenerative grazing as a solution to the problem of raising real beef and its climate damaging effects. According to them, livestock grazing is intrinsically bad for the environment, competing with wildlife for space and food, causing soil erosion and creating greenhouse gases from vegetation that would otherwise capture carbon. To 'prove' its point, the Company hired Quantis (a team of scientists which carries out 'life cycle assessments' for businesses so that they can develop and implement 'intelligent environmental sustainability solutions') to compare Impossible burgers with conventional feedlot ones. This concluded that the Impossible variety could save an impressive 89% of greenhouse gas production.

All the Impossible planet-friendly spin in the world might not, at the end of the day be enough to rule the fake burger market. Nestlé, with its huge global market reach, has jumped on the veggie burger bandwagon. 'Garden Gourmet' Incredible burgers are made from soya and wheat protein plus plant extracts (beet, carrot, bell pepper) to make them 'bleed' burger-like red liquid. Also coming soon from Nestlé is the Awesome burger based on pea protein isolate and wheat gluten. These new-fangled burgers we are assured will even sizzle like the real thing when cooked. Then there's the Beyond burger from Beyond Meat which is composed of pea protein, mung beans and brown rice, with added apple juice to make the burgers turn a realistic brown colour. "The great thing about peas is they're not soy" Beyond Meat CEO tells us because "Consumers don't like soy .. and that made everyone's job here really hard".

This doesn't bode well for Impossible burgers: they're not only soya, but GM soya with added GM 'blood' from soya via GM yeast.

Few seem to be questioning the healthy diet image of these highly-processed burger look-alikes. Eating too much of any one food (including red meat) or anything processed (including meat) is probably not very healthy. However, there's evidence suggesting the elderly benefit from increased animal protein intake (effects on other health-compromised sectors of the population may not have been studied). Also, food is not just about protein: there's the composition and nature of the protein, animal fats, minerals and other nutrients.

Interestingly, all these ersatz burgers may soon be obsolete, because the next big fake in the pipeline seems to be 3-D printed meat. Why settle for a burger when all that's needed is to pop a Nespresso-style capsule of pea and rice protein plus red paste into a printer and out will come a 'beef' steak (or 'chicken' breast or, soon, 'salmon', 'lamb' or 'pork')? And, if you really crave beef protein that never stood on four legs, a steak from animal cells grown in a lab can be printed off for you by your butcher, your restaurateur or even by yourself in your own kitchen.

The US Center for Food Safety encourages consumers to eat less meat and choose plant-based proteins, while pointing out that these meat-like substances are ultra-processed, poorly studied, under-regulated, and likely GM.


Fake meat in no way resembles the real thing. Your senses may be fooled by clever processing and neat chemical tricks, but your digestive system will not. In particular, the millions of essential microbes in your gut, will know the difference between food that once was living and a laboratory-based concoction: upset them at your peril [3].

Be aware that food-like substances, such a methylcellulose, are tested for acute effects only.

No one's rushing to count the actual environmental, health, and energy costs, or the loss of productivity involved in such extremely processed food [4] .

Note what Beyond Pesticides has been pointing out for years: "Consumer food buying decisions have a direct effect on the health of the environment and those who grow and harvest food". At the end of the day, you are in the driving seat. Remind yourself of some actions you can take in THE BREXIT RACE TO THE BOTTOM​ - January 2020