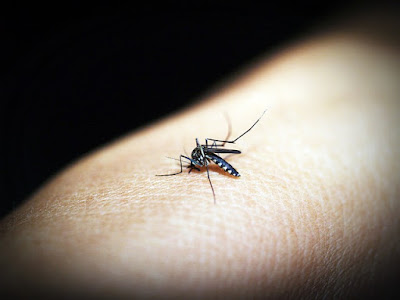 Efforts to control mosquito-borne diseases, such as malaria and dengue virus, have focused on eliminating the vector. Long-standing mosquito control methods have involved insecticides and removing the open bodies of water necessary for breeding. More recently, releases of GM sterile males [1], GM fungal pathogens [2], and self-destruct gene-drives mozzies [3] have been trialled.

Yet, paradoxically, even in areas where extreme reductions in the mosquito population have been successfully maintained, and even in areas where the surface water, vital for breeding, is absent for three to eight months of the year, malaria persists.
The belief that mosquitoes fly close to the ground and over only short distances has been at the bases of all the GM mozzie population control methods. Indeed, studies have demonstrated natural mosquito dispersal to be only some 100 metres. Re-emergence of the insects as soon as conditions allow has been attributed to local hibernation and the occasional chance migration.

However, the results of a newly-published study are forcing a re-writing of the rulebook on vector migration.

Scientists working in Mali, West Africa, sampled the insects flying at different heights on 617 nights. They caught individuals from ten known and three unknown species of mosquito at measured heights between 40 and 290 metres above ground level, with evidence suggesting that migration at even greater heights occurs. The data extrapolate to a continuous flow of tens of millions of mosquitoes travelling up to 300 kilometres a night by riding the prevailing wind. `

This doesn't sound like an occasional migration, but there's worse to come.

The vast majority (more than 80%) of the high-flying mosquitoes were female, and of these the majority (90%) had already taken a blood meal and were looking for a place to lay their eggs. Moreover, one third (31%) of the blood meals were potentially pathogen-bearing human blood. This doesn't sound like 'chance', but suggests an active decision on the part of the female mosquitoes to ride the wind and start new colonies in far-off lands.


It seems that local annihilation of mosquitoes by any means, chemical or GM, is doomed to failure, and may make the problem worse by starving out the natural predators necessary for a well-functioning ecosystem.

There are other, non-GM, ways to reduce the mosquitoes' potential to cause viral disease. For example, infection with Wolbachia, a natural bacterial insect pathogen, has been found to reduce viral transmission. Or, selecting and breeding naturally virus-unfriendly mosquitoes with which to flood an area could be used to create an anti-virus genetic shift in the mozzie population there.

Keep sowing the seed of awareness about the futility of waging war on insects which have a stack of survival tricks up their sleeves and can evolve at breakneck speed.