The plight of the honeybee 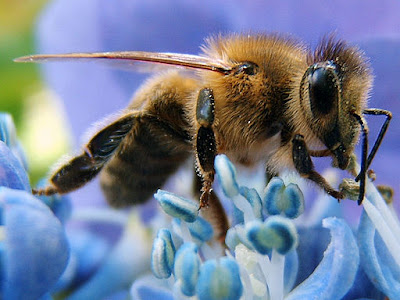 "New evidence is revealing we are teetering on the edge of an era of massive extinction, propelled in large part by the very pesticides and practices used with genetically engineered crops ... In a groundbreaking new study, researchers estimate that 40 percent of insect species face extinction - and we could be looking down the barrel of total insect population collapse by century's end, primarily as the result of the agricultural pesticides and mega-monocultures of industrial agriculture. Designed specifically for intensive chemical use, genetically engineered crops are key drivers of this impact" (Lappé) .

A huge proportion of our food supply is dependent on insects for pollination. In agricultural settings, one of the most abundant pollinators is the honey bee: in fact, one estimate reckons that one in every three bites of food we eat is from a crop pollinated by honeybees; and according to the United Nations Environment Programme, of the 100 crops that provide 90% of the world's food supply, 71 are pollinated by bees. Across America, commercial beekeepers are suffering astronomical hive losses averaging 40-50% annually, with some as high as 100%. This severely cripples their ability to meet pollination needs. At least one source of the disaster isn't difficult to find: honeybees are one of the non-target organisms impacted by the use of agrichemicals, and the impact is growing.

While wild insects are difficult to study, the honeybee can be used as a sentinel species to give us information about the effects of subtle changes.

A major concern is the modern widespread use of the herbicide, glyphosate. This chemical is used on the vast majority of GM crops in intensive agricultural systems; the same amount again is used on non-GM crops and in non-agricultural environments such as roadways.

A recent review of experiments on glyphosate's effects on honeybees revealed a disturbing range of subtle impairments. Individually, these won't kill the bee, but together could add up to the collapse of the colony.

The honeybees' behaviour, life-cycle and hive-based social structure give huge scope for exposure to, and accumulation of, glyphosate.

For example, bees have a foraging range of 3.7 to 6 kilometres, giving plenty of opportunity to land on wild or crop flowers treated deliberately or inadvertently with herbicides, and to collect nectar and pollen contaminated with glyphosate. Bees have good memories and good learning ability: they will return to areas where flowers are plentiful, particularly attracted, it seems, by the presence of low levels of the herbicide. Contaminated materials are amassed in the hive where the nectar (and its glyphosate) is concentrated by evaporation and used to feed the entire colony from newly-hatched larvae to all adult members.

Experiments suggest that glyphosate impairs honeybee sensory ability, learning processes and memory, all vital to the efficiency of the forager-bees' movements between the flowers and the hive, and ultimately to how well nourished and resilient the whole hive is. Glyphosate has been linked to delayed brood development and reduced larval growth. The herbicide also alters the bees' gut flora, putting the insects at risk of susceptibility to pathogens and malnutrition.

Indirectly, honeybees will be adversely affected by the lack of available flowers due to widespread treatments with glyphosate, and worker bees will have to expend more energy during their cyclical foraging, flying further in search of food for lower returns to the hive.

Only one single agrichemical has been mentioned here out of the hundreds routinely used on our crops.

These experiments involved only one single insect species, albeit one very important to us. All the other bees, pollinators and other insects in the environment have their own behaviours essential to survival and their own route of exposure to glyphosate: leaf-eaters, sap-suckers, root and seed munchers, will all get their dose of this systemic pesticide in their own way. All these insects play an important role in their own ecosystems.

And besides insects, there's us:


"In 2017, 87% of pears, 64% of apples and a quarter of bread contained pesticide cocktails. The Government's testing data for 2018 shows residues of 157 different pesticides, including 63 known, possible or probable carcinogens, and 41 suspected endocrine disruptors." (Pesticide Action Network UK)

all of which potentially interact to produce one glorious toxic mess in our food.

These toxins are all on the market because toxicological tests showed no observed adverse effect, but none have been tested as a cocktail of potentially interacting 'hits' on health [1]. The devastating effects of glyphosate on honeybees demonstrate how naïve that is.

If you can face reading the awful truth about the array of chemicals in your food, check out 'The Cocktail Effect' at http://www.pan-uk.org/the-cocktail-effect/