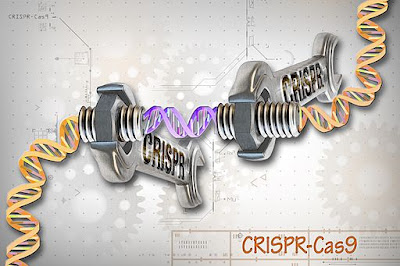 Gene-editing is a rising star because it is 'easy' and 'precise. Yet, gene-edited animals haven't so far managed to make it over the horizon due to the technical difficulty in preventing DNA pollution of the edited animals' genome [1,2].

However, much of the immediate commercial interest in gene-editing lies in crop plants, and plants present a whole stack of extra obstacles to gene-editing not present in animals.

A gene-edited animal can be created from an altered embryo which will grow into a whole animal formed from edited cells. This gene-editing mechanism can be introduced by several methods with minimal disruption to the cell membrane.

Plant cells, on the other hand, have a tough cell wall in addition to the cell membrane. Genetic engineers typically breach this either with a gene gun* or using a GM bacterial pathogen which has naturally evolved to enter plant cells and lodge bacterial DNA there.

* A gene gun blasts metal particles coated with artificial DNA through the cell wall and the inner cell structures. Very occasionally, a chunk of DNA rubs off in a useful location in the genome where it can express itself.

Successfully edited plant cells are then cultured in dishes with chemicals which induce them to grow into whole plants.

Since both the initial assault on the cells and the culturing process cause mutations, the gene-edited plants must be repeatedly bred with parent stock to dilute out all the errors.

Despite its popularity, gene-editing of plants has considerable technical 'bottlenecks', for example, off-target edits, persistent gene-editing activity in subsequent generations, reversion to wild-type under field conditions, poor gene-editing efficiency (especially in certain important crop plant species which have multiple copies of genes and genomes). As in animals, one of the biggest technical limitations in creating precise gene-edited plants is the difficulty in checking whether unwanted mutations are present [1].

Moreover, plants present an intrinsic challenge to all gene-editing, genetic transformation, and genome analysis because different parts of their whole structure can have its own unique DNA mutations not found anywhere else in the same plant: DNA testing of a small sample isn't representative of the whole plant, nor necessarily true at different growth stages or in different generations.


Suddenly, that 'easy' and 'precise' gene editing in plants seems even less easy and precise than it has proved to be in animals.

We came across the delightful expectation in one paper on gene-editing that the development of "non-GM genetically modified crops" would overcome the concerns raised by the insertion of foreign genes.

Keep pointing out that the foreign gene is only one part of the havoc wrought in the genome of both GM and non-GM genetically modified crops.