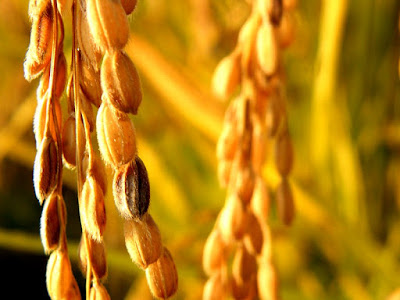 A major setback in the development of 'golden rice' intended to relieve vitamin A deficiency in people in developing areas has always been that the GM rice just doesn't produce enough of the desired 'pro-vitamin A' carotenoids.

Despite some two decades of failing to develop a viable 'golden rice', the Bill and Melinda Gates Foundation and US Agency for International Development (USAID) continue to fund the project.

Their latest trials involved golden rice event 'GR2E' grown in the Philippines. Analyses of this rice for carotenoids plus a lot of extrapolation, generalisation, guestimates, and calculation led to the conclusion (stated in the Abstract) that "Mean provitamin A concentrations in milled rice of GR2E can contribute up to 89-113% and 57-99% of estimated average requirement for vitamin A for preschool children in Bangladesh and the Philippines respectively".

A well-known GM promoter ecstatically announced this to be "checkmate" for golden rice's critics, and tweeted the conclusion (more or less as stated in the Abstract).

The "estimated average requirement" (EAR) is adjusted for life-stage and gender group, and the figures arrived at in the study allowed for a 20% loss of carotenoids during cooking.  However, it's based on the daily requirement of healthy individuals, and is the amount estimated to meet the needs of half the population (the other half of the population will not have their needs met).

The tweet inaccurately claimed the figures referred to the "average requirement" which suggests a nutritional benefit to most of the population.

Impressive though the higher figures (113% and 99%) in the Abstract are, these actually refer to school-age children only.  The important figures for pre-school children (89% and 57%) are less exciting.

Add to this that the actual amounts of provitamin A in a typical diet of stored golden rice is likely to be only 20% of the figures quoted [1].

Unhealthy sectors of the population, with multiple nutritional deficiencies besides vitamin A will require a complete nutrient-rich diet besides higher vitamin A supplementation.

Interestingly the conclusion that GR2E "can contribute" acceptable quantities of provitamin A in the Abstract (the only bit most people read in scientific papers) becomes a more nuanced "could potentially contribute" in the authors' discussion.  Reference is also made to the "known loss of (provitamin A) over time due to storage, processing and cooking methods".  Since measurements of such losses were published six months before the publication of the Gates/USAID trial, there seems no reason not to have factored them in.

The authors suggest that additional bioefficacy testing in at-risk populations is required, and that this "can only be accomplished following the regulatory authorisation of event GR2E for food use in the target geographies".

This final suggestion that controlled laboratory studies of GR2E can now be abandoned, in favour of authorising the crop and feeding it to people in at-risk areas can only be a GM-lobbying ploy.

Likewise the feigned ignorance of the magnitude of the golden rice storage problem, and the selective, skewed, inaccurate and incomplete presentation of the results, can only be GM lobbying dressed up as science.

Golden rice remains a high-tech, very expensive distraction for a problem which is crying out for long-term, sustainable solutions, such as, diversified diets, education, and resources to supply fresh produce and stop-gap supplements for at-risk sectors.

Don't let it go unchallenged if anyone in the media tries to repeat this propaganda.