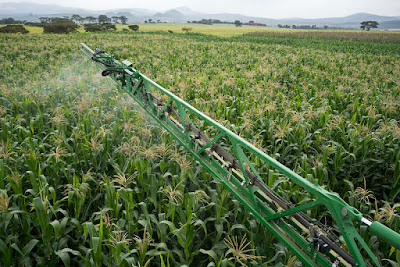 The artificial RNA produced by this technique, 'RNAi', is designed to match precisely the active RNA produced by a vital gene specific to the pest. By high-jacking the pest's own mechanism for silencing that gene, RNAi destroys the expression of the gene and the pest dies.

*Note. RNAi crop sprays are also in use, but are less effective at killing pests than the GM plant version which the pests consume.
A few months after the EPA ushered in this first GM maize with RNAi, a study was published which raised doubts about the claimed specificity of such insecticides. Using the honey bee as a model, the scientists "identified 101 insecticidal RNAs sharing high sequence similarity with genes in honey bees (indicating a huge scope for off-target gene silencing). "Of concern is that gene groups active during vital honey bee embryo formation and development had a disproportionately high sequence similiarity with all these RNAi pesticides: the scope for defective bees seems very real" [2].

Besides the assumed specificity which seems now unlikely, there's an assumption that all that artificial RNAi will disappear in the environment.

Natural RNA arises in very small quantities in very specific circumstances and in specific cells. It's an unstable material which doesn't hang about long. GM plants designed to churn out artificial RNAi in all parts of themselves subject to nibbling are a whole different ball game. The GM product will also, of course, end up in debris in the soil, water and air.

RNAi is difficult to detect in its natural environment. This has led to unresolved questions about whether it can enter, and be active in, human consumers: the biotech industry says RNAi disappears when it's eaten but this isn't a scientific fact [1].

Likewise, RNAi was assumed to disappear in the soil until recently when a team of scientists figured out a way to trace where it went. They found that in solution (in which form its presence or absence can be measured) RNAi degrades. However, the degraded fragments are ingested, and potentially used, by soil microbes. Where there are soil particles, intact RNAi strands can stick to them and be preserved. From there, soil microbes absorb and use them.

The big question here is whether soil microbes altered by (possibly insecticidal) RNAi will create a disrupted (and possibly very unhealthy) soil ecosystem.

Now that the fate of RNAi in the environment can be traced, the authors note that their work will "enable accurate ecological risk assessment of double-stranded RNA (RNAi)".


Given that GM crops with RNAi were approved in 2017, it seems a bit late to be starting an accurate risk assessment.

And there's another concern.

Scientists are just beginning to uncover the amount of cross-talk that goes on between organisms sharing any environment: and their language seems to be RNA. For example, pathogens and parasites use RNA to aid invasion of their hosts, hosts use RNA to thwart that invasion, healthy palnts 'chat' to each other via the soil fungi that connect their roots [3], and that's all we've figured out so far. What will all that artificial RNAi in the wrong place at the wrong time do to the health of our ecosystems?

Our bodies and, in particular, our digestive systems with their myriad microbes are another ecosystem which will have to deal with artificial RNAi particles.

We're already suffering enough health problems from the toxic chemicals we've been pouring into our bodies for decades. Tell your regulators we need to do the science before planting GM crops with churn out RNAi, because we don't need yet another layer of ecological destruction and chronic disease to add to the ones we already have.