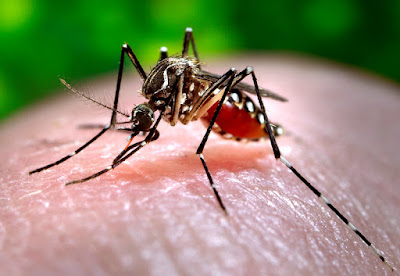 The mosquito has a reputation for being "the most dangerous animal in the world" credited with killing "one million people a year" (Bates).

Actually, it's unlikely any mosquito has ever killed anyone, but several very nasty human pathogens have seized the opportunity of hitching a ride from person to person inside biting mosquitoes.

Mosquito-born disease isn't just a developing world problem. Fifty-two Scots were diagnosed with malaria in 2018 after travelling abroad. One of them died.

By 'biting mosquito' is meant the egg-carrying females of 6% of mozzie species (out of about 3,500 known species) which need 'blood meals' to develop their eggs and which require, prefer or just happen to alight on a convenient body containing human blood which happens to be infected, before carrying on to infect the involuntary donor of their next blood meal.

Apart from this momentary carnivorous interlude on the part of a tiny proportion of the global mosquito population, the insects mostly feed on plant nectar.  They're important pollinators and a food for birds, bats, fish and frogs.  In other words, they form a significant part of ecosystems worldwide.  One science writer argues that, by making the tropical rainforests so inhospitable to humans, "Nothing has done more to delay (the catastrophic destruction of the rainforests) over the past 10,000 years than the mosquito".

Since chemical insecticides were invented, attempts have been on-going to decimate mosquito populations with treated bed-nets and room walls, and spraying the stagnant water which supports the larval stage. However, mozzies breed fast (their life-cycle is about three weeks) and can evolve quickly: insecticide resistance is an increasing problem.

Genetic engineers have had their attention on exterminating mosquitoes for some time.  Oxitec's GM mosquitoes with a gene drive to spread the self-destruct trait through the entire mozzie population have had the most press [1].  The latest GM venture hijacks a natural fungal pathogen of insects to deliver potent insecticides.

These new super-insecticides are based on those found in the venom of the Australian funnel-web spider, described by one author as a "scare machine".

Spiders produce an estimated 5-20 million 'peptide' toxins: these are tiny protein-like molecules which can kill by interfering with nerve function.  Most peptide toxins act specifically on the spiders' prey, and are then consumed by the same spider.  The funnel-web spider doesn't of course hunt down people, but by an evolutionary accident some of the peptides in its repertoire can kill a human within 15 minutes of being bitten by a spider they've chanced to disturb.

The fungus used is a mosquito pathogen which feeds off and kills its victims.  This takes a few days (it's not good pathogenic practice to wipe out your food supply too quickly) and, although the insects are sickened and take fewer and smaller blood meals and produce fewer eggs, there's still time for the mosquito to continue reproducing, biting and spreading disease.  The GM venom-producing versions, however, kill their hosts faster than they can reproduce, and do so at a lower level of infection by the fungus.

We are assured that the chosen GM venom isn't one which makes humans drop dead, isn't harmful to beneficial species such as honeybees, and is engineered to switch on only inside the mosquito.  The GM fungal spores can easily be deployed inside houses by mixing them with widely available sesame oil and using this to coat easily obtainable black sheets on which biting mozzies like to rest after their blood meal.

For maximum lethal outcome, the fungus can be engineered to produce multiple neurotoxins.  The most effective GM fungus so far identified generated both a spider and a scorpion GM venom.

A fungus which is ubiquitous in soil and which has close relatives able to infect a wide range of insects.  It has proven to be "very malleable, you can genetically engineer them very easily" (its DNA seems very open to change).  This fungus will be forced by artificial DNA to do something which is not in its own interests, i.e. to kill its food/host quickly.

An artificial neurotoxic peptide, a small molecule which has many close toxic relatives, not normally present in nature except in spider food.  This will be spread by infected mosquitoes wherever they fly and die.

A species of mosquito which bites people and animals and injects saliva.  It's also known to marshal its immune system defences on detecting the presence of an attacking fungus, and to be able to alter its reproductive cycle to beat the debilitation caused by the fungus.

The same toxin that's in the mosquito-busting fungus has been approved by the EPA as an insecticidal crop spray. It's promoted as a 'natural' non-chemical insecticide, even although it's produced by GM yeast in factories. By the same sleight of hand, the fungus is also a 'natural' mozzie pathogen, even in GM, spider-impersonating, form.

Oft repeated in the media is that the GM fungus is "not harmful to beneficial species such as bees". However, the only readily available supporting details seem to be that honey-bees exposed the GM fungal spores didn't die during a two-week observation and didn't become infected. No one seems to have asked what might happen when the GM spores are ferried back to the hive.

The illusions of safety and specificity are, of course, a necessary precedent for the biotech industry's bigger aim of using GM pathogens for the control of other mosquito- and insect-transmitted diseases of people and crops.

Any time you read about or hear the above claims in the media, point out to the editor that he or she is spreading pro-GM propaganda (bad journalism).

Note on alternative approaches
Since an ecosystem mozzie-gap will certainly be filled by something else, possibly worse, you might be wondering by now if it wouldn't be safer to target the disease rather than the innocent and otherwise useful carrier. Community-based trials are underway of 'Wolbachia' non-GM bacteria which naturally boosts the mosquito immune-system so that they are no longer able to host, or spread, key viral diseases, such as Zika, dengue fever, chikungunya or yellow fever. Glasgow University has recently developed a drug which kills the malarial parasite at three stages in its complex life cycle and prevents its sexual development.