Let there BE labels on genetically modified food 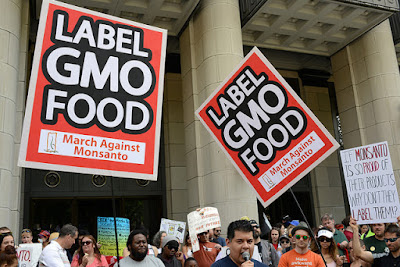 'Genetically engineered food' has never sounded like something anyone would rush to eat, and frankly "If you put a label on (it) you might as well put a skull-and-crossbones on it" (Asgrow Seed Company President 1994).

So, how do you sell genetically engineered food to the public?

The British government tried to get round the problem by down-playing the artificial DNA bit and re-branding genetically engineered as 'genetically modified' [1]. Then it tried to 'educate' us with the 2003 'GM Nation' debate [2], and naïvely by trying to generate scientific proof of how safe and great biotech crops were. However, the name change didn't change anything else, the more we're educated about GM the more we distrust it, and the scientific 'proof' fell flat (see below).


When the level of GM concern in Europe became too clear to ignore, we were given mandatory GM labels.

European GM labels take the form of a tiny printed statement appended to the end of the contents/ingredients list. Front-of -pack logos have been avoided. Nevertheless, the almost invisible labels have acted like a skull-and-crossbones: very little GM food has made its way into European markets.

America got round the expected consumer resistance problem by keeping GM incognito, and inventing a need to protect a frightened and confused public as the reason [3].

However, maintaining this subterfuge the US has been expensive: in one three-month period in 2014 the biotech industry spent $9 million keeping the skull-and-crossbones at bay. With the current rising public awareness of food quality in the US, the situation is clearly not sustainable.

Finally giving in to reality, the US Department of Agriculture (USDA) was told to get busy with proposals for some sort of labelling of genetically engineered foods. Options put forward include an industry-friendly consumer-unfriendly barcode to be scanned by a smart-phone or text-in service. Unexpectedly, besides this GM 'label' which is even less readable than the tiny print in Europe, another option on the table is to use a logo.

How, you might well ask, is the USDA planning to use a logo on genetically engineered food without generating the skull-and-crossbones effect?

Well, first of all re-brand it. Get rid of 'genetically engineered' or 'GE' (scary), and ditch 'genetically modified' or 'GM' (meaninglessly vague [4]). In fact, dispense with the 'genetic' bit altogether (it has unfoodlike, laboratory connotations), and replace it with a natural, living sort of a sound. Then colour it green and attach it to a cross between a smiley-face and a sunshiney flower, and thus 'bioengineered food' a.k.a. 'be' or 'BE' is born.

Since 'bio' is widely used across Europe to identify foods produced to strict organic standards, 'Moms Across America' has pointed out that the symbol is sneakily co-opting the Bio-Dynamic and Organic industries.

BE afraid, BE very afraid ... (sorry we couldn't resist).

'Bioengineered' is even more meaninglessly undefinable than 'genetically modified '. Only time will tell if US food companies will actually opt to put a green smiley skull-and-crossbones on their product, but if you have friends or relatives in the US, best warn them what to look out for.