What glyphosate has achieved in Argentina 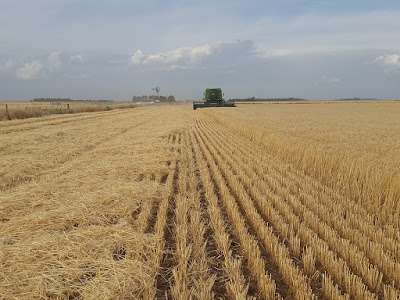 While the agrichemical and biotech industries insist their products are SAFE when used as directed, and regulators can't seem to figure out whose interests (the people's or industry's) to prioritise, what's happening in the real world where people have to live with the chemicals and the GMOs?

Physicians in rural areas of Argentina have become aware of a change in the causes of morbidity and mortality in their patients since GM monocultures tolerant to glyphosate-based herbicides arrived in their environment: it seems to them that cancer incidence has risen and reproductive health has declined. Such problems are notoriously linked to pesticide exposure.

Local concern was so great that medics got together with the National University of Cordoba to carry out an environment and health study.

The study surveyed a small typical agricultural town surrounded by GM soya and GM maize in summer, and wheat in winter, in fields which start at the immediate edge of the houses.

Monte Maíz has a population of less than 8,000 people including farmers who have relocated from rural areas bringing their work equipment and farming supplies with them. There are now five pesticide storage sites in the town, plus five silos with pesticide-treated grain. Its people have a high standard of living and clean water, eliminating two of the most common causes of ill-health (poverty and contaminated water); other confounding lifestyle factors affecting health were also eliminated.

Information on health over the previous five years was collected from 62% of the population. Alongside this, potential sources of agrichemical contamination were documented, and pesticide levels were measured in key locations.

Regarding pesticides, glyphosate and its derivative, AMPA, were by far the biggest contaminants, and were detected in 100% of samples of soil and grain dust. Unexpectedly, glyphosate levels were several times greater in inner town samples than in the soil in cultivated fields nearby*. A children's playground had 68 times the glyphosate contamination of the fields, and high levels were found in grain dust. It seems likely that the people of Monte Maíz are now being exposed to high levels of glyphosate because the town has become the operational centre for agricultural activity in the area: contaminated farm equipment, pesticide deposits, and stored contaminated grain all create glyphosate-laden dust [1] and run off in the town.


* Note that gardening activities in the town were discounted as a source of the glyphosate pollution.
Epidemiological surveys can't determine cause-and-effect. However, experiments elsewhere have shown that glyphosate can damage the vertebrate embryo and DNA, indicating a causal mechanism for reproductive problems and cancer. Also, a farm study in Canada found that glyphosate exposure was linked to late spontaneous abortion regardless of when exposure occurred.


"Glyphosate is now found in most, if not all, food products, including baby foods, where the hazard to health is much greater due to the special vulnerability of children to toxicants. Glyphosate has even been detected in some organic processed foods ... “(Professor David Schubert, Salk Institute for Biological Studies, California)

Don't accept any of it, neither the GM crops with their toxic load, nor the normalisation of reproductive damage, nor the cancers. Its time all pesticide levels in foods are monitored with a regulatory goal of reducing them to zero.