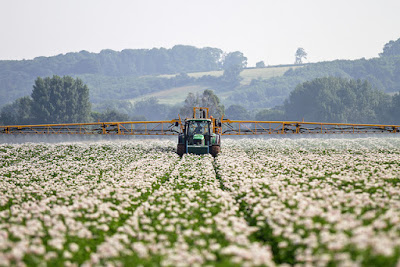 "For the last 60 years we have been on a pesticide merry-go-round, where successive generations of pesticides are released, and a decade or two later they are banned when the environmental harm they do emerges. Each time they are replaced by something new, and each new group of chemicals brings new and unanticipated problems. Considering our intelligence, it is remarkable that we humans can keep making the same mistake over and over again" signed by 12 scientists who have spent decades studying the fragile web of insects, the environment, and the crops on which we all depend for survival.

This merry-go-round is harming both ourselves and our environment: why can't we get off it?

The biggest barrier to escape seems to be the dominance of industry-led values and goals which prioritise increased crop yield at the expense of soil health, human nutrition, and ecosystem support.

Producers of pesticides and related high-tech seed find it very easy to scare governments and farming bodies with the dread threat of massive yield losses if their patented GM and hybrid seeds plus crop 'protection' chemicals aren't used. Promises of increased yields to feed the developing world can easily persuade overseas aid efforts and 'philanthro-capitalists' like the Gates Foundation to pour cash into GM crops and chemical-dependent agricultural methods. In fact, saving the starving of our burgeoning world population with all that extra yield has long been the most common excuse for GM crop development. The paltry 80% yield of organic compared with conventional crops is Big Biotech's trump card to dismiss the idealistic, backward-looking consumers who demand clean, green, more nutritious and tastier food.

Since the range of successful (albeit temporary) yield-enhancing agrichemicals, and the range of crop plants which yield more in response to these chemicals, and the number of successful genetic transformations which reduce yield loss are all very limited, the net result has been an extreme simplification of our entire food system. The range and varieties of crops grown has plummeted, our pollinators on which 35% of agricultural production depends are disappearing at an alarming rate; the diversity of life in the soil on which its fertility depends is struggling under the burden of chemicals and lack of plant roots. As for the ecosystems we've been elbowing out the way, our simplified agricultural systems are effectively simplifying the ecosystem too (see Note), and a simplified ecosystem isn't a resilient one.

Some US farmers have, however, hopped off the merry-go-round and forsaken the yield-obsession in favour of 'regenerative agriculture' (See Note).

An American study using corn as a model crop measured the pests, soil, profitability and productivity in regenerative farms compared with conventional farms. Its findings are sobering.

Yields on the regenerative farms were 29% less. This sounds like a resounding thumbs-down until you look at all the other results.

Corn pests on the regenerative farms, without all the chemicals annihilating them were reduced to around a tenth.

Regenerative farm produce was sold at a premium direct to consumers for seed or feed, and field use was diversified, for example, by grazing livestock between crops. These efficiencies in marketing and land-use, plus significantly lower costs per hectare for seed, insurance, irrigation and fertiliser gave the regenerative systems a 70% higher profit per hectare.

The authors also pointed out the absurdity of the current yield-obsessed mind-set when more than a third of that chemically-maximised food is wasted, and when seven calories of precious yield go into every single calorie of the beef we consume.

"These results provide the basis for dialogue on ecologically based farming systems that could be used to simultaneously produce food while conserving our natural resource base: two factors that are pitted against one another in simplified food production systems".

The current patchwork of regenerative practices within the dominant agricultural production model will not, of course, deliver an efficient outcome: we need a systems-level shift on the farm.

The costs of over-simplified agriculture are huge, unsustainable and unnecessary. Ask your MP, MEP and MSP to direct the ministry of agriculture's attention to regenerative agricultural systems as a matter of urgency.

****
Note. Examples of agriculture's effects on the ecosystem: