The greening of unsold GM papaya? 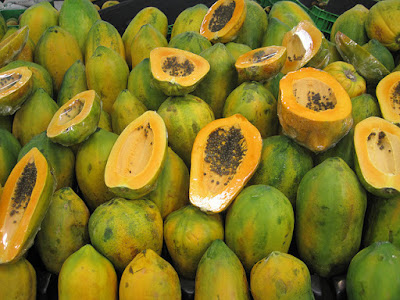 Shoe-horning your agriculture into the modern high-input, energy-hungry globalised system is particularly problematic for remote areas. Even Hawaii - American soil but a long way from the mainland - has realised it has an economic imperative for self-sufficient and sustainable resource management.

At present, Hawaii imports some 90% of its energy, and fertilisers must also be imported at a high cost.

Noting the large proportion of the Islands' papaya crop which can't be marketed, US Department of Agriculture (USDA) plant scientists have been looking at ways of turning this waste into fuel.

Papaya is a $10 million business in Hawaii, but farmers have hobbled themselves by growing papaya genetically modified to be resistant to ringspot virus: many countries won't import them. About a third of the papaya crop is discarded because it's bruised or mis-shapen.

The proposed scheme under investigation is to feed sterile pureed waste papaya to algae which naturally accumulate fat when they run out of nutrients. After this, the algal cells are disrupted so that their glycerol and oil content can be extracted. The algal residue can be added to fishmeal, the glycerol can be added to feedstock, the oil becomes biodiesel, and the farmers have another income stream.

In future, other Hawaiian crops such as sweet potato, guava, banana and cacao pulp may be fed into the biodiesel pipeline.


Does this sound like a wonderfully sustainable, green venture, or is it just a way to use a GM crop which doesn't have enough of a market but produces a lot of waste?

Consider the energy input and potential for environmental pollution at each stage of the papaya-to-biodiesel process: