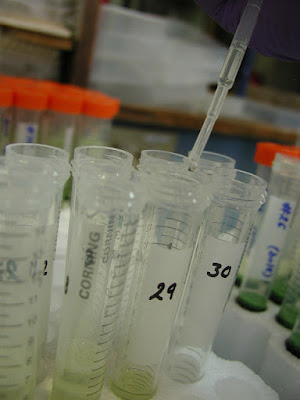 When you think of 'DNA', the odds are you picture the famous double helix: a neat ladder-like structure made of two strings of nucleic acid (NA) molecules each holding hands with its partner on the opposite string, and elegantly twisted like a corkscrew. Extending this ladder with an extra section, chopping out a bit, changing rung or two, or even adding in a whole extra ladder, is proving increasingly easy to engineer.

At the same time, it's becoming increasingly clear that DNA doesn't always sit in the form of a pretty helix.


Living DNA is a highly responsive and dynamic structure [1,2]. The ladder is stable, but to transition to an active form, the two halves come apart. The strings of nucleic acids can then hold hands in all different ways to form hair-pins or even three- or four-stranded pleats, with bulges and loops.

Exactly why DNA should choose to cavort with itself isn't at all clear. Some of these one-sided knots are proving ephemeral and others seem to stay in place for the duration of a cell's working life-span. Some DNA knots seem to be specially shaped to link to regulatory proteins, some seem to turn gene-processes on, while some seem to block gene action. A role for the knots in the preservation of DNA integrity and resilience is being suggested, as is the possibility that different types of DNA folding may have opposing influences. There are also suggestions that DNA 'knots' may form under conditions of molecular crowding.


The last point above is disturbing: by ramming in extra artificial genes, are we making the DNA tie itself in knots?


"There's so much of the genome we don't understand, probably like 99 percent of it".

He may well have been exaggerating our level of knowledge because, with such evident fluidity in the basic structure of DNA, it may never be possible to understand even as much as 1% of it.

Most of the research on knotty DNA involves human cells and focuses on cancer cures and lucrative new drugs. The emerging complexity however also applies to plants. The delicacy of the balance of DNA's stability, fluidity and interactiveness is completely beyond our ability to comprehend: we meddle with it at our peril. Tell our regulators to STOP GM.

Email ThisBlogThis!Share to TwitterShare to FacebookShare to Pinterest
Labels: DNA