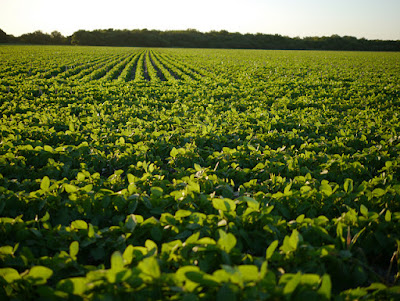 Argentina's 'modelo sojero', once promoted as a shining economic example for others to follow, seems instead to have led straight to the social disaster many predicted.

The 'modelo sojero' [1] is based on a move to high-tech monocultures of a few commodity crops (in this case mainly GM soya, a lot of wheat and GM maize) produced for export markets and for growing the country's GDP. Boosted by extreme free-trade, light-touch regulations and privatisation, the model channels the cash flowing in from far-off lands into state hand-outs to reduce poverty.


"The Argentinean modelo sojero may produce an impressive national balance of payments, but it amounts to putting all the country's eggs into one basket and shipping them overseas, while at home the cupboards are bare and the workers idle while the ransacked environment goes to ruin around them".

Sadly, we were right.

Latest estimates are that 32% of Argentineans are in poverty with around 6% destitute, and malnutrition in children aged 2-19 years is running at 48%. The government is scrambling to impose austerity measures, lay off public service workers, and slash energy subsidies (electricity prices alone have jumped 500% since 2016).

Thousands of Argentinean people have joined together in street protests demanding the passing of the 'Emergency Food Law' which has been stuck in congress since August 2017, and demanding that the current economy 'reforms' are halted.

How could all this happen without anyone noticing the modelo sojero is a one-way street with nothing for the people at the end of it?

A review of the published research on 'socio-economic' impacts* of GM crops provides at least some insight.

The main findings include:
The name of the game has been over-extrapolation of highly restricted data to reach generalised conclusions inadequate for country-scale agricultural reform, especially that involving a built-in dependence on external markets.


Somehow, neither food and jobs for the people nor their well-being seem to figure in a country run on the basis of biotech promises of endless profit.


The only sustainable agricultural system is circular, self-regenerating and as diversified as the people and land it serves.


*One definition of 'social impacts' is "the consequences to human populations of any public or private actions that alter the ways in which people live, work, play, relate to one another, organize to meet their needs and generally cope as members of society. The term also includes cultural impacts involving changes to the norms, values, and beliefs that guide and rationalize their cognition of themselves and their society" (Interorganizational Committee on Principles and Guidelines for Social Impact Assessment (2003) of the USA).