The elusive 'GM for yield' question 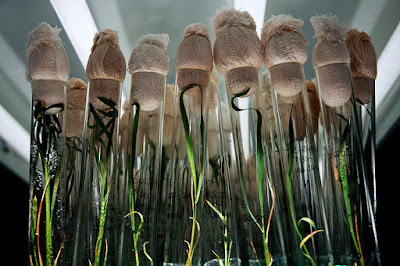 A refreshingly sensible 'Opinion' on the possibility of creating a resilient crop genetically transformed to increase yield has been published. The authors are biotech scientists from Rothamstead Research (Britain's leading GM research facility) and Syngenta (originally a Swiss biotech company, now Chinese).

They point out that all the historically successful genetic transformations which added in a single dominant gene to generate a single foreign protein throughout the plant were relatively straightforward. The changes forced on the plant didn't disturb any main-stream growth processes.

Trying to increase yield is a whole different ball game. This involves wholesale, whole-plant changes in carbohydrate use and storage, along with fine adjustments in plant hormone balances, photosynthesis and all the supporting enzymes. 'Yield' is controlled by whole sets of interacting genes: if you try to change one gene, or a small subset of genes, all that happens is that the rest of the genome adjusts to return things to the way they should be.

Scientists are now looking for 'master' controlling genes. It's been found possible, for example, to change the master gene controlling a group of genes which act to lower the sugar content in key cells, and trigger a 'starvation' response in the plant which then accumulates carbohydrates and increases yield.

The problem identified with this approach is maintaining the essential resilience of the genetic background into which the artificial genetic change has been introduced. In terms of responsiveness to the inevitable environmental challenges, these crops may be weakened. It means any such GM plant would require extensive, real-life field testing: a very time-consuming and very expensive operation. And that's before any food safety considerations attached to produce from an over-blown, super-sized plant are tackled.

A sensible final question is asked in the Opinion:

"Can GM or genome-editing techniques be utilized for large improvements in yield potential and abiotic stress tolerance, or should other breeding and chemical methods be prioritized for these traits until the most promising gene targets in their cell and developmental contexts are identified and understood?"

Local breeding of local crops for yield maximisation is the surest route to resilience in the right environment and within the right knowledge background. It's also the quickest, and doesn't raise food safety concerns due to the accumulation of by-products, or toxins within the artificially altered biochemical pathways.

To answer their question: GM crops for yield may be possible, but GM crops for resilience are unlikely and either is a very expensive and time-consuming route indeed.