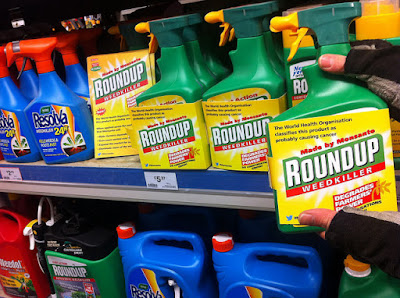 Not, perhaps, the best way to start a new year is the announcement that the European Commission has re-approved the use of glyphosate herbicide for five years.

This means that responsibility for the consequences of this highly controversial weedkiller is off-loaded onto Member States: France and Italy immediately announced their intention to phase out glyphosate over the next three years, and Austria is set to join them.

The re-approval avoids treading on the toes of the biotech industries which make the herbicides and the glyphosate-tolerant GM crops whose use depends on them. It also props up the huge, heavily glyphosate- and GM-contaminated feed import trade from the Americas. Many European farmers are breathing a sigh of relief because they can't imagine life on the farm without glyphosate. All these powerful forces have been putting pressure on the Commission since 2012 when the first 10-year approval lapsed, and year after year since has seen failure after failure to agree.

However, the current re-approval, by a qualified majority, seems to have rested solely on political and regulatory juggling in Germany. It has emerged that the 'Glyphosate Task Force', a coalition of pesticide companies formed to ensure the re-approval of glyphosate, prepared a report on glyphosate safety which Monsanto submitted to the German Federal Institute for Risk Assessment which copied it, mostly word-for-word, into its 'own' report, which unsurprisingly concluded the herbicide is safe.

Despite being the rapporteur state for glyphosate in the EU, the German Government has been a key player in the repeated failures to re-approve glyphosate. This was because clinging to power meant dependence on the support of the Greens who will have nothing to do with the herbicide. However, just before the vote, the German government fell out with the Greens, and changed sides. This conveniently avoided the government contradicting the 'findings' of its 'own' risk assessment body.

"The European Commission has created a scandalous legal and political mess around glyphosate, so it is up to the Commission to come up with a strong exit plan in order to regain the trust of European citizens." (Claude Turmes MEP)

If all this legal and political mess sounds like a tale of factions cosying up for profit and power, with neither science nor safety getting a look-in, that's probably just what it is.

The biotech industry is planning waves of GM crops made tolerant to different herbicides (all with even worse safety profiles than glyphosate). Herbicide-tolerance has always been, and looks set to remain, the mainstay of GM crops.

Get rid of the chemicals - all the chemicals, not just glyphosate - and we'll knock GM crops on the head. Here are some suggestions for action from Jonathan Latham:

You could go further: "How about making regulators liable for their decisions? How about proposing to end subsidies to industries that use synthetic chemicals in or on foods? How about automatically compensating individuals whose bodies contain toxic chemicals and who become unwell, from a fund provided by the industry which made that chemical?"

Does this sound like idealistic, head-in-the-clouds, Wizard-of-Oz fantasy? Try reading A Precautionary Tale: How one Small Town Banned Pesticides, Preserved Its Food Heritage, and Inspired a Movement by Philip Ackerman-Leist, ISBN 978-1603487051.