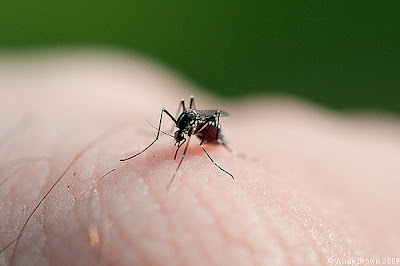 Gene drive technology could soon become the much needed "self-sustaining, species-specific and affordable" means of eradicating horrific diseases, such as malaria, by wiping out the insect vector upon which the spread of the pathogen depends [1].

Current research is focusing on wiping out mosquitoes by giving them a gene drive with a 'nuclease' enzyme which will disrupt the function of a key mosquito gene needed for fertility in the females: by creating successive generations plagued by sterile females, the mosquito population and the disease will be decimated.


With a generation time counted in days and little tendency to fly very far during their short lives, the gene drive is predicted to be very rapidly effective in the area where the GM mosquitoes are released.

This sounds like a win-win situation (for humans), but is it that straightforward?

As one researcher in the field said "As with any control approach aimed at suppressing an organism, 'push back' from the target organism is to be expected". Put another way, when Nature finds artificial controls pushing Her world around, She finds ways of pushing it back into shape.

When scientists followed the fate of a model, caged population of gene drive mozzies, they found that the female sterility trait was, indeed, driven into the insects for the first few generations with the predicted results. However, after that the effects began to decline, and after 25 generations the gene drive was no longer driving anything meaningful in terms of population control.

Further investigation of the mechanism of this 'push back' revealed that it is inherent in the gene disruption arising from the gene drive itself.

When the DNA of the gene is damaged by the gene drive nuclease, the gene no longer functions. However, the damage can also result in small, unpredictable mutations in the surrounding DNA. Some of these mutations can be functional in compensating for the disrupted gene or in blocking the gene drive. The outcome is that fertility is restored.

What the researchers found was that during the first few generations when the gene drive was accumulating in the population, there was a significant silent accumulation of mutations at the target DNA site.

They highlighted that technical means to reduce 'push back' should be used, for example, the insertion of multiple gene drives in the mosquitoes released, and adjusting the location of the gene drive in the mosquito genome so that it is active in an area of DNA minimally prone to mutation.


Female mosquitoes need a single blood meal to mature their eggs. When they 'bite' they pierce the skin with their serrated proboscis and inject an anti-coagulant to keep the blood flowing as they such up their meal, plus a mild pain killer to escape detection. This direct exposure of the blood stream to GM mosquito tissues and secretions has long been a concern. Add to this the question of just how species-specific the gene drive we will be exposed to actually is.

GM sterile females may be created which don't need a blood meal and don't bite. However, there is a real possibility of fertile biting GM females harbouring DNA disrupting gene drives arising over time.

Even with technical avoidance tactics, the fast generation time of GM mosquitoes with their DNA disrupting gene drive is a recipe for on-going mutation which could create diseases far worse than the ones they're supposed to cure.

Complain while you can.