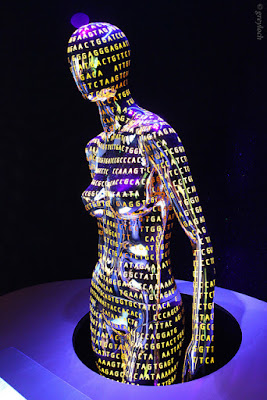 We don't eat people or mice, but there's a lot to be learned from GM versions of both.

GM people aren't yet a reality, but soon could be. The first clinical trial of a GM technique to correct a faulty gene is already underway in China and another is due to start next year in America.

GM humans have become a realistic goal since the invention of the 'CRISPR/Cas9' system for making precise changes in any genome [1].

CRISPR/Cas9 has been used successfully to restore the sight of blind laboratory mice by correcting a faulty gene. The researchers didn't notice anything wrong with their GM animals. However, the technique is to be applied to humans, and there's an awareness that "every new therapy has some potential side-effects". They therefore decided to check out the possibility of "secondary mutations in (DNA) regions not targeted" by the CRISPR's RNA-homing device which seeks out the DNA sequence destined to be changed.


The routine assessment of off-target effects involves a computer-based search of the animal's genome (its total DNA sequences) to identify any DNA sequences similar to the target which CRISPR might latch onto by mistake. This is a very cheap and easy way to do a preliminary check for potential side-effects, but it makes a lot of assumptions about our level of knowledge and the variability of the genome. DNA mutations can be very subtle, involving insertions or deletions of very short DNA sections or even single nucleotides (DNA building blocks). Even the smallest change can have major impacts on the animal's physiology.

Using a representative individual from two different generations of newly-sighted GM mice as a test case, the researchers checked out the whole genome. They found 164 insertions/deletions and 1,736 single nucleotide changes, decreasing slightly to 128 and 1,696 respectively two generations later.

Of these, 38% of the insertions/deletions and 51% of the single nucleotide changes were associated with known genes and therefore potentially disruptive in some way. A large proportion of the mutations were identical in both the mice tested, and clearly non-random.

The effects of these mutations might only be revealed under stress.

In conclusion, the authors suggested that, while technical improvements might solve the problem of such side-effects in the genome, these errors may be an inherent property of CRISPR. Further studies using CRISPR should consider examining the whole genome for changes.


Interactions between DNA and RNA are obviously much more intricate than the simple chemical matching-up model we apply in the 'science' of biotechnology.

It's interesting how fast CRISPR/Cas9 has moved to trials in humans in advance of established dedicated safety testing. However, in medical circles, there is an acute awareness of treatment side-effects, and this has inspired at least some, more comprehensive, testing.

In the case of GM plants, microbes and livestock, the use of CRISPR/Cas9 is touted as precise, predictable and controllable with no science to back up the claims. There's no reason to think our food plants and animals will be any less damaged by such off-target effects than the mice were.

Worse, as pointed out previously, CRISPR/Cas9 is in our food where it might find hundreds or thousands of genomic sites to alter within our own cells and in our body's microbial flora.

In view of the clear potential for catastrophic outcomes, make sure that extensive, deep clinical testing is mandated for CRISPR/Cas9 gene edited food (and people).
Background