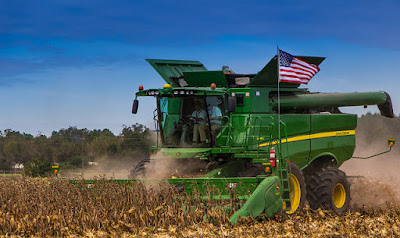 Denying local communities the freedom to choose their own agricultural system, not only what they grow but how they grow it, has suddenly become a priority in the USA.

By August this year, 28 States had passed "seed pre-emption laws" never deemed necessary nor desirable before.

The new laws are primarily designed to block counties and cities from banning GMOs, but the language used in some bills could enable them to extend to such things as manures, fertilisers and irrigation (these could be used to promote, for example, agri-chemical corporate interests, agri-chemical dependent GM crops, and futuristic drought-tolerant GM crops).

We've long been aware of biotech industry contracts which forbid farmers to save GM seed or to host experiments on GM seed. Now we have a whole spate of legislative initiatives to add to US farmers' straight-jacket: seed pre-emption laws, a prohibition on outsiders photographing farms, "right-to-farm" laws which make it easier to snuff out complaints, for example, about animal welfare. In the 'Land of the Free', farmers seem to have very little freedom to do anything except what Big Ag wants them to do.

Indeed, the Organic Seed Alliance has commented that:

"This thinly disguised attack on local democracy can be easily traced to out-of-state, corporate interests that want to quash local autonomy".

Nearly every seed pre-emption law borrows language from a 2013 model bill drafted by the American Legislative Exchange Council, a pay-to-play operation where corporations buy a seat and a vote on 'task forces' to advance their legislative wish lists, and whose corporate members include Monsanto, Bayer and DuPont.

Excuses put forward by State officials to justify the seed pre-emption laws include cutting the red tape from around farmers' throats, the added costs and "management" nightmare of local agricultural diversity, and the local lack of expertise or resources to make sound scientific decisions about the safety and quality of seeds.

All this dovetails nicely with President Trump's anti-regulatory rhetoric, and his order to remove barriers to economic prosperity and to quality of life in rural America. All this appears to be aimed solely at promoting consolidated, super-sized operations supporting, and supported by, the biotech industry. High on Trump's agenda is an attack on overseas regulations that restrict GM imports, the use of the World Trade Organisation and other agencies to insist that any barrier be science-based, and the use of international trade rules based on fact rather than prejudice.

This agenda begs the question whose 'science' and whose 'facts' will be drawn on to force US GM agri-products on other countries?

In May, the US Environmental Protection Agency (EPA) started dismissing scientists from its major scientific review board apparently with the aim of expanding the pool of applicants and adopting an inclusive approach to regulation. The EPA will "consider" replacing the academic scientists with representatives from industry.

The farming States in America are very large with a huge diversity of geographic and ecological conditions to which an "incredible" diversity of agricultural practices are applied. Potential problems arising will be equally diverse and localised. If a local ban is needed to protect farmers' interests at the community level, it's hard to imagine how such a prohibition would manage to happen at State level.

The crux of this problem is that any ban on GM crops or agrichemicals will now be far too politically sensitive ever to happen. And any consideration of the science will be nowhere.

For an awful lot of American farmers, all these vital life-supports have been placed in the hands of the biotech and agri-chemical industries, where they will be whittled down to vanishing point. An agricultural juggernaut is in place which will never move fast enough to respond to real problems because the problems will be local and too small to be visible.

Now, who would have thought that, in the world's greatest democracy, we'd see state-controlled agriculture? Perhaps it's not called communism if it's driven by corporations?