The 'needs' of agricultural aid in Africa 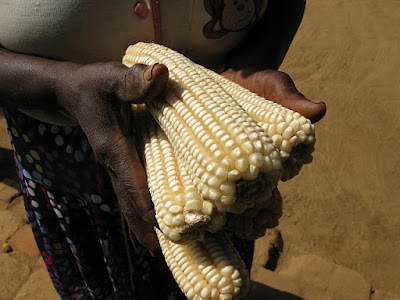 The Gates Foundation is probably the biggest philanthropic venture ever, distributing billions of dollars every year. Its traditional priorities are global health programmes and educational work in the US.

However, during the last 10 years, the Foundation has hugely expanded its funding for agriculture, especially in Africa where 19 out of the 25 most food-insecure countries in the world are (2014 Global Food Security Index).

In 2006, the Foundation set up the 'Alliance for a Green Revolution in Africa' (AGRA) as the "face and voice" to fulfil its guiding principles (see below).

NGOs at GRAIN* were concerned that the Gates 'Green Revolution' sounds like a renewed effort to persuade Africans to want an imported, industrial model of agriculture based on corporate-driven chemicals, high-tech seeds and commodity crops for the globalised market. It therefore took a look at where the Foundation's funds were actually going.


In 2014, GRAIN reported that Gates' grants go overwhelmingly to research establishments in the Global North, particularly to America and the UK.

It revealed that CGIAR, a consortium of 15 international research centres which tried and failed to bring about a Green Revolution in Africa in the past, receives very sizeable funding from the Foundation. Previous efforts in the area lost relevance when the biotech industry took control of the markets for seed and associated chemicals. Now, it seems, CGIAR has teamed up with the high-tech agri-suppliers and is back on the case.

GRAIN reports that the African Agricultural Technology Foundation (AATF), a "blatantly pro-GM, pro-corporate research outfit based in Nairobi" (also funded by the international aid programmes of USAID and the UK DFID) gets its slice of the Gates' pie.

AGRA, of course is well-funded. An important part of its work is providing grants to African organisations, universities, scientists and small businesses. It plays a critical role in "generating adapted local technologies" and giving farmers access to improved "locally-adapted crop varieties". What this seems to mean in practice is that AGRA establishes "agro-dealer" networks of small private stockists who sell chemicals and seeds (including hybrids) to farmers. The agro-dealer project in Malawi, for example, is also funded by USAID, the UK DFID and a local Trust one of whose trustees is Monsanto. Further support for the scheme comes from AGRA in the form of training farmers to use the technologies.

GRAIN "could find no evidence of any support from the Gates Foundation for programs of research or technology development carried out by farmers or based on farmers' knowledge, despite the multitude of such initiatives that exist across the continent ... The Foundation has consistently chosen to put its money into top-down structures of knowledge generation and flow, where farmers are mere recipients of the technologies developed in labs and sold to them by companies".

Gates' dollars also buy political influence. For example, AGRA intervenes directly in the formulation and revision of agricultural policies and regulations in Africa. At least three American Universities have been engaged by the Foundation to promote an African desire for biotechnology.

The implementation of Gates guiding principle (See below) is open to interpretation.

African farmers' 'needs' and 'wants' are translated into forms addressed with Global North, high-input technologies. 'Partners' are created by the Foundation itself or are parties set to profit from a Green/Gene Revolution in Africa.

There's a danger that the Foundation 'solutions' are throwing money at technical quick-fixes which fall apart as soon as the cash stops propping them up.

Compare and contrast Gates' approach with that of the Schumacher Foundation which is highly active in Africa and aims to help people to help themselves: its guiding principle is "find out what people are doing and help them to do it better". These 'find out' parts are key because "If the 'people' are left out of development planning ... then the final outcome will be disastrous".

The Schumacher Foundation shares knowledge and provides advice on intermediate technologies which "simply 'fit' in to the social context as a whole without depending on the availability of factors which, as experience shows cannot be depended upon."

Find out more about Schumacher's Practical Action at www.practicalaction.org.uk

Gates Foundation first guiding principle on agriculture:
"Listening to farmers and addressing their specific needs. We talk to farmers about the crops they want to grow and eat, as well as the unique challenges they face. We partner with organizations that understand and are equipped to address these challenges and we invest in research to identify relevant and affordable solutions that farmers want and will use".

*Genetic Resources Action International is a small international non-profit organisation that works to support small farmers and social movements; its work is oriented towards Africa, Asia and Latin America.
SOURCES: