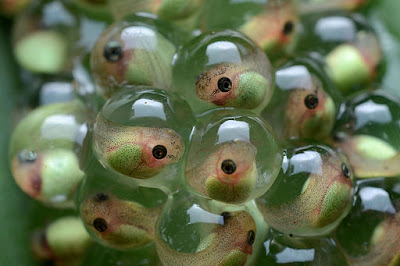 'Bt' toxins are a favourite tool of genetic engineers for creating crops which generate their own pesticide to kill whatever is their most troublesome insect pest.

In Nature, such toxins are formed by a variety of strains of Bacillus thuringienses bacteria (hence 'Bt') found in soil and on plants. Organic farmers may use Bacillus thrunigienses fermentations as natural, short-lived insecticide sprays on their crops. Outside of organic agriculture however, Bt-toxin containing formula are used to control specific problematic insects, such as disease-carrying mosquitoes.

Bt toxins are proteins which are active in the conditions found in insect guts, and which bind to substances on the insect-gut surface causing damage there which quickly leads to death.

In this model view of 'Bt' toxins, they are inactive in the guts of other, non-target animals, easily digested in the acid-conditions in the mammalian stomach, and will only kill specific insects whose gut-lining has the specific binding sites for the specific variety of Bt they have eaten. This makes Bt very safe for humans and other wildlife in the environment.

Or does it? The model is being questioned with regard to whether it's the whole story [1], and in particular, whether Bt proteins are as specific to insects as advertised.

A study published in 2015 noted that "The effects of Bti* on amphibians have received little attention" and that "the tests used to justify the approval for use and release of Bt products into the market as well as the protocols used to assess its toxicity are extremely superficial".

Amphibians such as frogs are sensitive to toxins and are commonly used as biomarkers for environmental health; they also lay eggs in stagant water where the tadpoles live until the adult frogs develop. As every gardener knows, frogs are important in pest control, and are to be encouraged. Tadpoles and mosquito larvae share the same environmental niche. And the conditions in their guts aren't so different either.

Besides the question of the Bt protein itself, environmental treatments use commercial formulations. While the toxin is thoroughly tested to make sure it kills the required pest (such as a specific species of mosquito), the formulations will include agents considered to be 'inert' and are commercially confidential, so receive no further attention. 'Inerts' are included to disperse the Bt in water, stick it to the insect's food, and to help the toxin to kill. All of these properties are potentially harmful to life in their own right.

Awareness of some major holes in the science and in the gaps in the grounds for Bt safety claims, scientists in Argentina treated tadpoles with a common Bt formulation and measured a range of health effects.

The tadpoles were exposed to the Bt formula for two days (the usual life-span of Bt in the environment) at the range of concentrations used in practice.

At the highest concentration, all the tadpoles died and no further tests could be carried out.

At lower concentrations of Bt, mortality was dose-related. Because stagnant water will be re-treated at regular intervals, the total deaths of tadpoles in a real-life situations are therefore likely to be significant.

Biochemical markers for stress were elevated in tadpoles exposed to higher concentrations of Bt.

Increased structural abnormalities of the cell nucleus (this contains the DNA and genes) were evident in Bt-treated tadpoles. This kind of toxicity isn't dose-related because the defects arise during cell-division, when new nuclei are formed, and won't occur if the toxin is acting to suppress cell-division.

Note that standard gene toxicity testing tends to use bacteria whose DNA/nuclear structure is fundamentally different from animals.

Finally, the Argentinean scientists looked at the tadpole's guts, revealing gross tissue changes in the gut wall and its blood supply, and even erosion of the gut-lining, indicative of inflammation and stressor-defences.


In deprived urban areas in Argentina, waterbodies are mass-treated with Bt and some are then consumed by people. Although simulated digestion studies demonstrated total Bt degradation in the human digestive system, Bt proteins have been found circulating in Canadian women and their unborn babies. This was unexpected and has been attributed to the consumption of Bt-generating GM maize. Worryingly, it means our concept of Bt digestability is way out. It may also mean that exposure to 'inerts' is giving a helping hand to Bt and a whole raft of other environmental toxins into our bodies.

Bt in GM dust and organic applications (where there's no digestion and are no 'inerts') has been reported to cause allergic respiratory problems in farm workers.

*Bti refers to a strain of Bacillus thrunigienses called 'israelensis' which is used in stagnant water where mosquitoes lay their eggs.