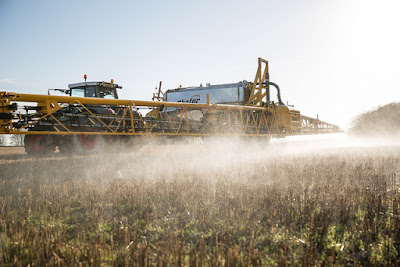 Readers of GM-free Scotland will be familiar with warnings that glyphosate-based herbicides, which are heavily used on most GM crops, have added ingredients to help glyphosate penetrate into the plant cells and kill them more efficiently [1].

Glyphosate dissolves well in water, but sprayed on a crop without its 'helpers' it would glide off the waxy outer layer and not much would make it through the fatty membrane around the cells.

As the weeds around glyphosate-tolerant GM crops have evolved to become less and less sensitive to the herbicide, the biotech industry has had to rescue its pet GM technology by producing more aggressive glyphosate-based formulations. Most of these added ingredients are detergents (fat-dissolvers) which disrupt the wax- and fatty- barriers designed by Nature to protect the plant.

Regulators have allowed added ingredients in agricultural pesticide sprays to be declared 'inert' and may be mysterious 'commercially confidential' substances.

The safety of 'inerts' is poorly studied, usually involving little more than acute, mainly irritant, properties on eyes and skin.

All this should raise a few eyebrows to questions such as:
Science has already raised concerns of a link between glyphosate and endocrine disruption [2], now a more thorough study has been published investigating the roles of both the 'inert' co-formulants and the pure weedkiller.

A team of French and Hungarian scientists used cultured human placental tumour cells which are well-characterised and recognised as a good model for toxicity studies. They exposed cells to one commonly-used form of pure glyphosate, to a range of common glyphosate-based formulations, or to a range of common 'inerts' in pure form. After 24 hours exposure to the test substances at well below agricultural concentrations and well below established toxic levels, the cells were tested for the integrity of their mechanism of oestrogen/testosterone (male/female hormone) balance, and for toxic effects on their respiration and membranes.

COMMENT The toxic effects of the inerts seem to interact in an unpredictable and complex way, because more toxin doesn't make them more toxic. Perhaps the extreme toxicity of some inerts has been noted and other secret inerts have been added to reduce this?

Endocrine disruption was observed due to glyphosate alone at one-third agricultural dilution.

All the formulations and co-formulants exerted endocrine disruption at dilutions of at least 800 times more than that used in practice, and well-below the toxicity threshold.

Note that the real-life effects may be even worse than the dire picture painted by this study. Only a small sample of glyphosate types, 'inerts' and the hundreds of formulations actually in use was tested. Some 'inerts' are only identified by chemical group not by the specific substance present in the formulation, and some 'inerts' are not available for research. Cultured cell-lines are known to be less sensitive to toxins than the real thing in a human body, and this short-term experiment didn't address any questions of bio-accumulation (i.e. chronic toxicity) of any of the test materials. And, the co-formulants used in glyphosate-based herbicides are used in other agri-chemical sprays.

The authors were surprised to find that one of the newer glyphosate-based formulations which uses "Transorb2 technology" (an unspecified form of petroleum distillate) as a penetrating agent to replace and bypass the toxicity of the older detergent 'POEA', was actually the most toxic herbicide of those tested.

The finding of significant membrane disruption by everything tested except glyphosate could have significant implications for endocrine disruption (besides the cell toxicity it was measuring) because the mechanism for oestrogen/testosterone conversion is membrane-bound.


The bottom-line here is that none of the 'inert' substances in glyphosate-based herbicides (or other pesticides) is actually inert.


It's time to call time on the presence of any mythically 'inert' chemicals in your food. Start by telling your MEP to take action on the EU regulations which have approved them.