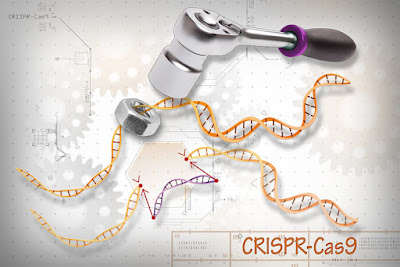 The latest blue-eyed boy of genetic engineers is the 'CRISPR' gene editing technique [1].

CRISPR is commonly described as a "molecular scalpel" suggesting an edit made with surgical precision, or as "molecular scissors" suggesting a neat, controlled snip, or even as "shears" (to clean up Nature's mess?).

Sceptics have described CRISPR as "a chainsaw in the hands of a child", a "hand grenade", and "malware" which searches out any chosen sequence in the DNA code and corrupts it.

Magic scissors operated by a sorcerer's apprentice might also be apt.

Back in the 1990s, gene insertion was touted as a precise science. When it became inescapable that the 'precision' of GM existed only in the minds of genetic engineers and in their patents, gene editing became the saviour of GM technology. Compared with messy old side-effect-plagued transgenic methods, gene editing techniques (especially CRISPR) were precise, so precise that they could be deemed no different from what could arise in nature.

The realisation that CRISPR and other gene-editors are clunky has led to a plethora of improved constructions, such as 'high fidelity' and 'prime' editors*, to increase the precision of their action.

Note. Improved gene editors have, for example, different versions of the artificial enzyme that pulls the DNA sequence apart, or adjustments to the homing mechanism to narrow its target range, or severance of only one side of the double DNA ladder to attach a DNA 'correction' sequence.

Will GM technology of any kind ever be wholly precise and free of unplanned consequences? Probably not.

This is because no matter how much you minimise and refine the mechanism for the artificial DNA change, you can't avoid the need to artificially breech the target cell's defences against environmental damage and its stress responses, nor can you avoid the individual cell's rejection of, and attempt to heal, the imposed change, nor can you avoid the cascade of genome-wide reactions within the whole gene network to even the smallest artificial change of the DNA.

Genetic engineers have no control of the cell's genetic and epigenetic* reactions before, during and after the molecular scalpel/scissors/shears have done their thing.

*Epigenetic refers to attachments to the DNA arising from environmental interaction which alter the behaviour of the genes.

In the case of plants, whose cells have a protective cell wall which must be breeched, and which are subject to a DNA-scrambling cell-culture stage in the GM process, all the above sources of unplanned consequences are magnified.

Most of the problems with gene editing have come to light because medics have been trying to develop genetic cures for human disease: in these cases, side-effects would be catastrophic for the patient and must be reliably excluded.

In the case of Big Biotech's gene-edited crops, the attitude is much more gung-ho: just back-cross the GM plants a few times and most of the errors will be diluted out. End of problem.

Note. When scientists did look at the real-life effects of a tiny DNA edit, their results surprised them [2]


"We cannot leave public and environmental safety to the expectations or assumptions of those who alter the genetics of living things and whatever potential hazards they chose to look for. Instead, we need impartial regulators empowered by strong legislation to protect public health and the environment ...There is no guarantee that the use of these techniques will result in predictable outcomes - or that any resulting products will be safe" (European Network of Scientists for Social and Environmental Responsibility, ENSSER)

If you want to get a further handle on the magnitude of the food safety implications of any type of GM, check out A TALE OF MICROBES, YOUR GUT AND DISEASE - December 2019.