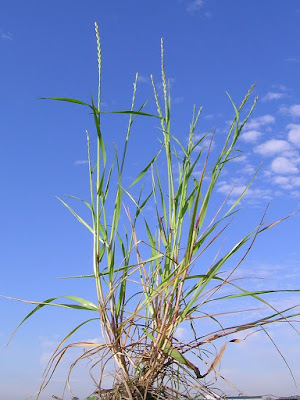 Weed scientist wisdom didn't, it seems, factor in the qualities which make a weed a weed.

Major problematic weeds, such as burning bush (Bassia scoparia), Palmer amaranth [1], and Wimmera ryegrass (Lollium rigidum) all have excellent tolerance of adverse environmental conditions, and they produce thousands of seeds superbly adapted for dispersal by natural vectors such as wind, animals, water, and, in the case of burning bush, tumble weed.  Also they are genetically very diverse as a result of obligate out-crossing (they can't self-pollinate).  These characteristics combine to make them self-spreading evolution machines.  It's hardly surprising that all three of these plant species have evolved into superweeds, resistant to multiple herbicides, and with a diversity of DNA tricks up their sleeves to achieve this [1].

What caught out farmers, regulators and the biotech industry is that, once one herbicide-tolerant weed has evolved, its pollen and seed can naturally disperse a long distance.  Add to this that, if the superweed is growing in a field, the herbicide-tolerant seeds can be harvested along with the crop: they can then turn up wherever the crop or its harvesting equipment goes (or passes by).  If the contaminated crop is an animal feed, viable super-weed seeds can be deposited in manure.

Since there hasn't actually been a new weedkiller on the market since 1984, increased spraying with yet more of the same old herbicides is the first solution offered, even if that was what caused the problem in the first place.

Old-fashioned hand-weeding, tillage to bury unwanted seeds, and planting competitive crops (all the kind of things Roundup Ready GM crops were supposed to make a thing-of-the-past) have proven highly successful at avoiding the accumulation of an herbicide-tolerant seed bank.

Inevitably, CRISPR-based gene editing to disable the evolved herbicide-tolerance genes in the weeds is also being explored [2].

Seeing how quickly the weeds have already evolved to beat the toxins showered on them, selling an endless succession of patented CRISPR weeds to farmers would be fabulously profitable.

One of the reasons no one reckoned with how far and how fast, the herbicide tolerant weeds would rove was that no one measured how far their pollen or seeds actually go.  Limited study areas, small sample size and inadequate detection methods all combined to underestimate the potential for weed spread.

These same constraints on knowledge seem to bug all GM-related subjects the biotech industry doesn't want to know.

Remember that troublesome fact if anyone tries to persuade you of the 'known' wonders and safety of GMOs.