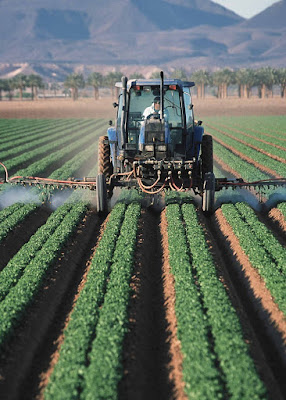 Most insidious among all the environmental toxins are the endocrine disrupting chemicals (EDCs) which cause hormone dysfunction at very low levels of exposure.  Their damaging effects are often permanent and can harm future generations.

The big problem is that EDCs interfere with the many complex hormone balances essential for development and health: they can react directly with a hormone or with its target in the cell, thus destroying hormone function; they can mimic hormones causing huge physiological disturbances; they can act indirectly on the biochemical pathways which create hormones, or on the pathways controlled by hormones which can be subtly disruptive in all sorts of ways.

A study published in 2016 examined the epidemiological and toxicological scientific literature on the effects of nine major classes of known EDCs (including three insecticides).

It estimated that EDCs cost the US $340 billion (2.3% of GDP) each year, while the European EDC burden is $217 billion (1.28% of GDP).  By these scientists' calculation, if Europe had been more on the ball in phasing out organophosphate pesticides, it could have saved itself $121 billion.

The study was able to include less than 5% of known EDCs, so the true total costs of them are much higher.

While the US 'Food Quality Protection Action Act 1996' requires additional safety considerations for children before a pesticide is used in agriculture, the weedkillers used on GM herbicide-tolerant crops (glyphosate, dicamba and 2,4-D) were already in use many decades before this.  The scale of the problem has, of course, increased many fold since it became possible to spray GM monocultures of staple food crops directly with these herbicides.

All three of these weedkillers give cause for concern.

Glyphosate is known to disrupt a key enzyme needed for the conversion of male hormones (androgens) to the female hormone (oestrogen); note that the balance between these two is critical for health and development.  Glyphosate also negatively affects steroid hormones linked to the adrenal glands.

Dicamba has been known for decades to cause foetal abnormalities at low doses in rabbits and birds; more recent molecular studies have found dicamba interferes with sex hormone levels in fish.

2,4-D is known to increase the effects of the male sex hormone, testosterone, and is toxic to the thyroid and reproductive tissues.

Science on the adverse effects of all three of these herbicides is limited because direct experimentation on humans is, of course, not possible.

Herbicides are sprayed as formulations with (often secrete) added ingredients to boost their performance.  The added extras are considered 'inert' because they don't kill weeds, but may be far from inert when it comes to endocrine disruptive qualities [1].

The same year as the paper estimating the cost of EDCs was published, America passed a law requiring review of potentially hazardous substances.  This should have been an important step forward, but no funding was allocated to it, and, at the current rate, it will take 100 years just to check out the 500 or so most suspect substances among thousands of candidates.

The crux of the endocrine disrupting chemicals problem has been described by Mnif et al.:

"Human foetuses, infants and children show greater susceptibility than adults.  Much of the damage caused by EDC occurs during gametogenesis (sperm and egg formation) and the early development of the foetus.  However, the effects may not become apparent until adulthood.  Moreover, foetuses and infants receive greater doses due to the mobilization of maternal fat reserves during pregnancy and breastfeeding.  Infants are extremely vulnerable to pre and postnatal exposure to endocrine disruptor pesticides, resulting in a wide range of adverse health effects including possible long-term impacts on intellectual function, and delayed effects on the central nervous system functioning".

There's no question that it's a false national economy to side-step safety testing.

Draw the true costs of chemical damage and endocrine disruption to the attention of your regulators.  Tell them to keep in mind that "The countries that lead the way in making the changes will eventually win by being more competitive in the eyes of the public that increasingly values avoiding EDC exposures" (Trasande).  A good place to start reducing our chemical burden is with the removal of GM herbicide-tolerant crops from the food chain.