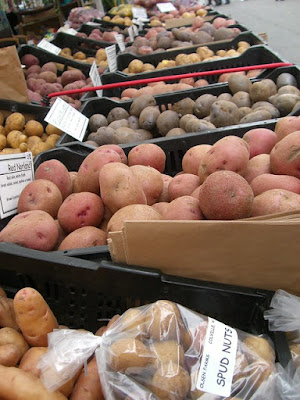 Those that do reach the human stomach are highly processed carbohydrates and chemicals (a.k.a. junk food, or food-like substances).  In the dietary desert we now inhabit, our animals' nutritional needs are better met than ours.

Down on the farm, with its minimal rotation of a minimal range of crops, its toxic chemicals above and below ground, and its exclusion of plant and animal wildlife, natural nutrient cycles have collapsed and the ecosystem has been simplified out of existence.

The back-drop to all this is climate change.  Unstable weather conditions, high temperatures and drought are decimating yields with unprecedented frequency, and grain reserves are low.

Stop-gap policies to deal with the problem use global trade and farming subsidies to compensate for national crop failures; neither of these are permanent solutions to a worsening situation.

Future hopes are pinned on crop development for increasing yield and drought tolerance, with GMOs centre-stage.  What this amounts to is more of these same few staple crops with conventionally or artificially tweaked genes, grown in the same uniform way with much the same chemicals.

Two enterprising scientists took a look at historical agricultural data to see what factors correlated with the stability of the 'national yield' (that is, the annual summed calories of all edible crops harvested per area of crop land).  They extracted good quality data spanning 50 years (1961-2010) for 176 crop species in 91 countries.

Perhaps predictably, the introduction of irrigation systems was significant: indeed, it proved the second-most effective means to stabilise the national yield.

The most effective national yield stabiliser, however, was crop diversity.  Clearly, if one crop fails and there are already others in the ground to compensate, national yield will never take a catastrophic hit.

The high soil carbon content coupled with crop and ecosystem diversity in fully organic agriculture is well established aids to mitigate water stress.  Promotion of organic methods as a tool to stabilise yields in the face of climate change deserves serious investigation.

You could ask for this at the same time as you're pointing out to regulators that history proves the benefits of crop diversification to food security, and that's what we need.