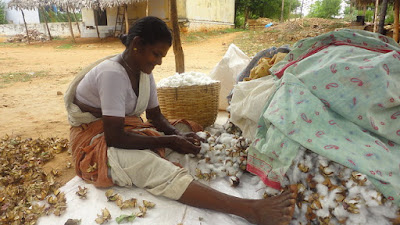 Agrichemical corporations and their local dealers had no difficulty ensnaring Indian farmers.  Once the first 'high' of a booming cotton crop and ensuing wealth had been experienced, farmers came straight back for more: more GM seeds, more fertilizer and more pesticides.  The dealers also supplied credit, information and advice about their products, and guaranteed purchase of the crop.  Land-use and skills were diverted into high-tech cotton production, and pesticides purchased for cotton were applied also to the dwindling traditional crops in the land.

In the early years, the soil was still fertile, cotton pests hadn't yet found the new crop, and other pests were meeting powerful synthetic toxins for the first time. It was a win-win situation for farmers.

Then reality reasserted itself.

The pests got hardier and pesticide use spiralled into cocktails of up to ten chemicals.  Degraded soils could no longer be rescued by artificial fertilisers.  The ecosystem went onto free-fall under the burden of toxins and absence of food for wildlife.

As input costs escalated, profits plummeted and debts became unsurmountable.  The need for child labour meant no chance of an education for the next generation, and men, women and children were sickened by exposure to pesticides.  Necessity bred illegal trade.  Society went into melt-down.  Defeated by their circumstances, suffocating under mounting debt, on the brink of poverty and watching their chemical-saturated land falter, the area was a hotbed for farmer suicides.

The only 'solution' their mentors, the dealers, could offer was more of the same, and the trap closed.

"Pesticide addiction pulled everyone and everything along in a net of interlocking feedback loops and chain-reactions that trussed up both the ecosystem and the social system." (Getting Clean).

Two villages, in areas high-ranking for unrestrained use of pesticides, have managed to break free.

A combination of desperation, the red hairy caterpillar (with thick body hair which chemicals can't penetrate, and happy to eat most crops), a strong-minded, prominent village elder willing to pioneer new farming methods, and devoted NGOs and scientists, led the villagers to try the alternative path of 'Non-Pesticide Management' (NPM).

Non-Pesticide Management (NPM)
A large part of NPM is the revival of a wide range of traditional methods of pest control, using local, self-prepared or cheap inputs.

It includes, for example, the use of the neem tree to repel and starve the pests: neem seeds for the soil, neem seed infusions for spraying, and neem leaves to protect the harvest.  Sadly, the availability of neem is low since many of the trees have been logged for pulp.

Livestock manure with earth-worm compost is used to restore the soil.  Villagers report an unexpected boon that the produce from their enriched soil lasts longer after harvest without spoiling.  Sadly, availability of manure is low because most families have fewer cows than before.

To control soil-borne pathogens and pests, NPM also uses sticky traps, bonfires and alternative crops to attract and remove pests, perches in the fields to attract insectivorous birds, and soil solarisation (in which the soil is covered with a transparent polyethylene film so the sunlight heats it).

Society, health and the ecosystem were restored.

This really is a win-win situation for the farming community, and it's sustainable.  The villages are being used as a model for others to follow and are visited by thousands of farmers a year.

Needless to say the agrichemical dealers are not so happy.  They tried to punish NPM farms by paying less for their cotton crops, but the formation of the co-operative market put paid to that.  State government acceptance has now thwarted attempts to block the spread of NPM.

The impact of chemical-dependent agriculture, with which GMOs are designed to mesh, became very quickly obvious in the small-holder situation in India: it caused a collapse of health of the environment, of the society, and of the individuals.

This process is being repeated all over the world, but it's slower and less obvious because people in developed countries are distanced from the land.

The story of the two villages in India could, however, be repeated anywhere in the world.