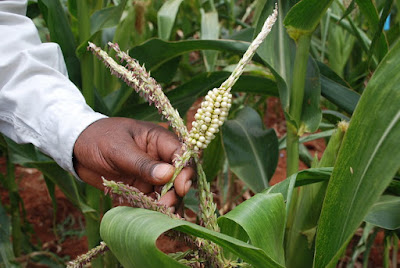 The WEMA project to provide 'Water Efficient Maize for Africa' is a public-private partnership co-ordinated by the African Agricultural Technology Foundation, and involving among others, agribusiness multinational Bayer-Monsanto, and national research systems in Kenya, Mozambique, South Africa, Tanzania, and most recently Ethiopia. It is largely funded by the Bill and Melinda Gates and Howard G. Buffet Foundations, and USAID. (African Centre for Biodiversity)

The US government / Gates Foundation project to provide 'Water Efficient Maize for Africa' (WEMA) is hitting some rocks.

First to show scepticism was South Africa which has phased out its WEMA-donated GM insecticidal maize, MON810, due to massive and widespread pest resistance to the Bt toxin. South Africa followed this by rejecting Monsanto's triple-stacked drought-, pest-, and herbicide-resistant GM maize on the grounds that the fields trials hadn't demonstrated the promised drought- and pest-resistance, nor any agronomic nor yield advantage over conventional varieties.

This was a major blow to WEMA plans because the drought-tolerant maize is also being trialled in Kenya, Uganda and Mozambique.

Next, and possibly even more telling, was Tanzania's decision to immediately terminate all ongoing WEMA GM field trials, including an order to destroy all remnants.

The reason for this move was that the government realised it was being conned, manipulated and used by biotech lobbyists.

What rang the alarm bells was unauthorised invitations issued by WEMA-paid scientists to key government officials and biotech lobbyist, Mark Lynas, to witness how well the GM crops were performing. Positive, unauthorised, unsubstantiated 'results' of the trials were then released, and published by all media outlets. These hailed the GMO a "success" and a solution to the longstanding problems of pest invasions in farms across Tanzania. The apparent collusion between scientists and lobbyists also fed into Lynas' social media propaganda which portrays the people of Tanzania as poor and hungry, and uses them to justify the introduction of GM crops.

Farmer organisations in Tanzania have called on the government not to allow GMOs to be used in the country for the obvious reasons that neither farmers nor the nation shall benefit from them.

Biotech lobbying seems to have penetrated right to the heart of government of Tanzania, where scientists paid by WEMA are pushing for revisions to the country's biosafety regulations. They want the rules changed over from strict liability (which makes whoever introduces a GMO into the environment directly legally responsible for damages) to fault-based provisions (in which fault or negligence on the part of whoever introduces a GMO has first to be proven).

Next in line of fire is Kenya where the industry-funded International Service for the Acquisition of Agri-biotech Applications (ISAAA) has declared the people will be on the brink of starvation if they don't have GM.

WEMA drought- and insect-resistant GM maize in Kenya has been rebranded 'TELA' (Greek for 'double shield'), and is claimed to offer a "sure solution" with "demonstrated efficacy" to the control of fall armyworm, a major pest. This assertion is made despite evidence from the Americas that the pests rapidly evolve tolerance to this GM trait.

The well-oiled, well-funded PR machinery is, of course, fanfaring all the right messages. Kenyan farmers are "eagerly waiting for the technology" and one young maize farmer is trotted out to tell the world that GM "gives me hope that I can continue farming". TELA is apparently a "success" despite not yet having happened. An American genetics professor assures the public that "Science ensures ... that all risks are addressed. People need to be informed about GMOs objectively by experts."

COMMENT This sounds distinctly like an echo of the 1990s pro-GM propaganda in Europe about saving the starving of the Third World with GM ... scientists know exactly what they're doing ... people just need to be educated ...

While the GM assault on Kenya was in full flow, the US Department of Agriculture (USDA) published a report on the drought-tolerant maize situation in America. It shows that 80% of drought tolerant corn acres were planted with seed conventionally bred for the trait (although most are GM for the usual herbicide- and insect-resistance traits), and that at the national level only 3% of all US corn acres in 2016 were planted with seed genetically transformed for drought tolerance. It's clear that US farmers are not adopting GM drought tolerant maize, preferring instead conventionally bred varieties.

According to the the African Centre for Biodiversity (ACB), WEMA/TELA promotes a privatised food system which increases farmer costs, and makes unsubstantiated claims about food safety, food security and crop efficacy. The ACB is pressing for somewhat different action to combat the challenging conditions in Africa, in particular, the use of holistic, ecological strategies such as intercropping, crop diversification and locally adapted (royalty-free) varieties.

The biotech industry's GM drought tolerant maize isn't generating the profit it expected in the US. What better way to cut its losses on all that R&D than to offload the crop, philanthropically of course, on the "poor" and "starving" people in African countries?