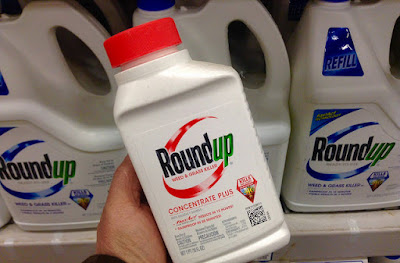 Monsanto has spent four decades manipulating the science, the regulators, the media, and patent law in pursuit of profit from its blockbuster glyphosate-based herbicide, Roundup [1]. When the Roundup-causes-cancer scare reared up, Monsanto seemed confident it could manipulate that too. Bayer, a company well used to handling litigation over harmful products [3], also seemed confident it could ride out the storm, and proceeded with its acquisition of Monsanto despite the impending law suits.

It's interesting to see what's been unfolding in the American courts, where two glyphosate-based cancer cases have so far been judged (although the appeals will no doubt stretch out for some time to come).

The first case was that of Lee Johnson, a ground keeper whose job included extensive use of Roundup, and who has non-Hodgkin lymphoma [4].


Non-Hodgkin lymphoma (NHL) is a type of cancer that affects the lymphatic system, usually the lymph nodes. It's not a single disease, but rather a group of at least 86 closely related cancers. In the USA, NHL is the seventh most common cancer affecting adults, accounting for about 4 percent of all cancer cases. Its incidence doubled between 1975 and 2013.

After an almost unanimous guilty verdict in the State court, Johnson was awarded $289 million.

Monsanto asked the judge to overturn the verdict, claiming it unfair because the jury had been "inflamed" by some of the rhetoric in Johnson's lawyers closing statement

The company would have got away with it, had it not been for five jurors who were outraged that they were being labelled as unable to understand the science and fool enough to be prejudiced by rhetoric. They took the unusual decision to extend their civic duty beyond the end of the trial and to protect their carefully considered verdict. Their letter of protest to the judge (also publicly released), caused the judge to back off reversing the jury verdict, but the award was slashed to $78 million.

Johnson accepted this reduced settlement, but this still left Monsanto guilty as charged, and the company appealed the decision. The upshot has been that Johnson's attorneys have countered by filing an appeal to reinstate the original jury award of $289 million.

While this tit-for-tat game was going on in the State court, another Roundup-cancer trial took place in the Federal court.

This second case was that of Edwin Hardeman who had regularly controlled the weeds on his 56-acre plot with Roundup products since the 1980s, and who now also has non-Hodgkin lymphoma.

Interestingly, just as Hardeman's case was going through the court, two studies of the scientific evidence linking Roundup to cancer were published. One was an up to date meta-analysis of data in America, and the other used pooled data from France, Norway and America. They concluded that a statistically significant increased risk of non-Hodgkin lymphoma was attached to exposure to the herbicide. Three of the authors of one study were members of the US Environmental Protection Agency's advisory panel on glyphosate.

By this time, Monsanto plus the glyphosate baggage were being integrated into Bayer. Not impressed with Monsanto's failure in the first law suit to defend its newly acquired product, Bayer substituted its own legal defence team (the one which had won the litigation over its blood-thinning drug, Xarelto [3]) to tackle the Hardeman problem.

In a smart move to prevent the jury hearing all the damning evidence of Monsanto's manipulation of the science and the regulators, Bayer asked for the case to be heard in two parts. The first part would consider only if there was a preponderance of scientific evidence showing Roundup to be the cause of Hardeman's cancer. If this were proved, a second trial with the same jury would hear all the gory details and determine Monsanto's liability.

The grounds for the request for bifurcation of the trial were that the jurors would be swayed by the emotions if they saw documents exposing corporate malfeasance.

COMMENT This is ironic because, from biotech-era day one, Monsanto has been guided by Big PR which advised it to 'stir the emotions' with images of starving children in Africa to get people to embrace GM foods (along with bucket-loads of Roundup).

On one level, this was a brilliant tactic to prevent the jury getting a true and complete picture of the science, because the preponderance of the science (especially that used by regulators) seems to have been visibly manipulated by Monsanto. On the other hand, the request is tantamount to admitting that, yes, there is evidence of despicable behaviour by Monsanto agents which will sway the jury. It also meant that, if the jury found Roundup caused Hardeman's cancer despite having only incomplete and manipulated science available to it, "that's a real problem for Monsanto".

Besides agreeing to this unusual change in the proceedings, a number of other Monsanto-friendly actions by the judge (who had previously expressed scepticism about the link between Roundup and cancer), have fuelled concerns that the trial was unfairly stacked in the company's favour.

Even before the trial started, the jury selection seemed to be overtly partisan. Based on written questionnaires, Monsanto's request to strike several prospective jurors from the pool on the grounds of their negative perception of the company were granted. Hardeman's attorney's request to remove a prospective juror who believed Roundup was safe and that Monsanto was "very honest and helpful to society" was refused.

Once the trial got underway, Hardeman's attorney was relentlessly interrupted by the judge, who demanded she speed up and move on without explanation, described her opening remarks as "incredibly dumb", prevented her from explaining the process behind various regulatory decisions about glyphosate to the jury, and threatened to sanction her. In the opinion of one very experienced observing journalist, the judge spoke to Hardeman's lawyer in "angry, belittling tones".

Despite all this, the jury's unanimous decision was that Roundup had caused Hardeman's cancer, and ruled that Monsanto should pay $80 million in damages.

Hardeman's legal team said that the unanimous ruling made a strong statement about the company's behaviour over the years:


"Today, the jury resoundingly held Monsanto accountable for its 40 years of corporate malfeasance and sent a message to Monsanto that it needs to change the way it does business".

As at the end of March 2019, a third Roundup-causes-cancer case was already underway in the State courts. Another 11,000 or so are lining up behind it.


There seems to have been a pro-biotech jury from which a lot of vital evidence was withheld by a biased judge, who attempted to silence the injured party's attorney. Despite all this, the jury had no doubt whatsoever that Roundup caused cancer, and that Monsanto should pay. With a bill of 11,000 x $80 million pending, "that's a real problem for Monsanto", indeed.

This speaks volumes about the strength of the evidence, which many concerned scientists have been saying for years, that Roundup causes cancer and that Monsanto knew it [1].