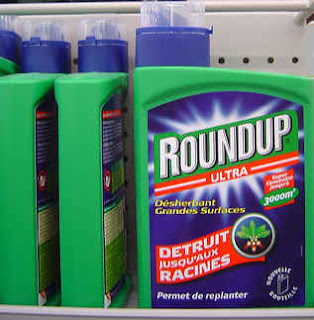 In 2012, a rat feeding study on the toxic effects of Roundup herbicide and a Roundup-tolerant GM maize sprayed with the herbicide was published [1]. During the experiment, an excess of tumours was observed in treated animals. This unwelcome suggestion of a link to cancer caused panic in the biotech lobby and sparked a controversy which just keeps on simmering [2].

That same year, another study on glyphosate (active ingredient of Roundup) was published by Chinese scientists, which wasn't any less damning to the herbicide, but didn't suggest cancer and went unnoticed [3]. This experiment used rat embryological cells which had been induced to differentiate into nerve cells. Exposure to glyphosate triggered programmed cell death (self-destruction of healthy cells once their role is complete), and cell degradation. The latter process, in extreme form, is characteristic of Parkinson's disease.

Aware that agricultural workers regularly exposed to pesticides have a high prevalence of neurodegenerative disorders, Brazilian researchers took a close look at what glyphosate does to nerve cells. Using the hippocampus area of the brain of young rats as a model, the scientists found glyphosate caused impairment in several processes, for example, in the ability of the neurones to transmit impulses and to protect themselves against stress damage.

As all this evidence was building, Nancy Swanson produced her US-wide study which noted the parallel trajectories of increasing Roundup use and the incidence of Parkinson's disease [5].

Extending Swanson's epidemiological approach by focusing on exposed populations, American researchers looked at premature deaths from Parkinson's disease in a population in Washington State living within one kilometre of land with agricultural use. They identified an association between Roundup and paraquat applications and Parkinson's.


We've established that Roundup doesn't strike anyone dead, which seems to be the basis for allowing us to eat it, breath it, drink it and touch it. Insidious, long-term, crippling effects which cost us dear in care, in loss of productivity and in human suffering, don't seem to figure.

The cancer connection caused a reaction, mainly aimed at trying to 'prove' Roundup doesn't cause the disease [2]. Parkinson's disease hasn't (yet) made the splash it deserves.

Think about raising awareness of this additional long-term, neurodegenerative, threat posed by GM-linked chemicals, or it will be swept under the carpet.

Note. Parkinson's disease is the second most common neurological disorder in the US. It is considered multi-factorial, and presents as muscular dysfunction, such as tremor and rigidity, leading to premature death. Direct care costs of Parkinson's in the USA were estimated to be $14.4 billion in 2010.

Note. The hippocampus is an area deep in the brain vital for memory and learning. It is one of the first areas showing damage in dementia sufferers.