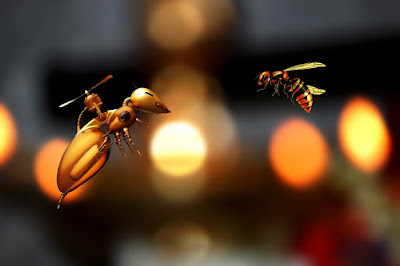 Paradoxically, modern man seems to have gone out of his way to make life impossible for the insects he depends on.

Urban sprawl, asphalt, concrete, aforestation, and weed-free fields have taken their toll of wildflowers, and as crop sizes expand, the wild flower-filled gaps between them shrink. It can be a long flight to the nearest food.

Commercial agriculture has whittled down crop varieties to a handful, while careful standardisation to ensure a uniform harvest means uniform flowering with nothing to follow. These feast and famine landscapes don't feed bees. And the banquets come laced with pesticides, all damaging to the bee immune- and nervous-systems.

GM crops inflict a whole new level of problems on pollinators: Bt insecticides produced by many GM crops can stunt the development of the young in the hives, while glyphosate-based herbicides sprayed liberally on most GM crops can be lethal to some bees and cause learning difficulties in others [1,2]. Despite the harmful effects, honey bees inexplicably seem to prefer to feed on flowers with low levels of glyphosate contamination.

After decades of damage from escalating glyphosate applications on glyphosate-tolerant GM crops, dicamba-tolerant GM crops are replacing them. This latest biotech venture is proving even worse news for bees because dicamba drifts, wiping out all flowering crops and wild-flowers in its path.

All these stresses make our bees vulnerable to diseases, especially parasites and viruses, culminating in complete colony collapse.

Is there an answer?

At the moment, small beekeepers try to move their hives to ever dwindling 'safe' zones away from agriculture. Large-scale beekeepers operate a rent-a-bee scheme which trucks the hives around the country to pollinate the orchard monocultures, stressing the bees as they travel. Crop breeders focus on a limited variety of plant strains which are self-pollinating to offset the lack of bees. None of these are very sustainable 'solutions'.

Unwilling to consider changing the damaging dominant agricultural paradigm, technology is planning to change the bees.

GM 'superbees' promise to be tolerant to pesticides and resistant to disease. Given the numbers and varieties of each of these problems, plus the rate at which new chemical formulations are deployed and at which diseases evolve, superebees are going to need an awful lot of genetic changes. Bee-stings from natural bees can cause fatal allergic reactions: superbees could well have super-deadly stings. Moreover, they're going to have to be altered in a way that the bees themselves can't spot, because the hive's housekeeper-bees are ruthless about throwing any defective individuals out of the hive.

One professor in Tokyo is nevertheless confident that GM bees will be a reality in no more than three years.

Bee breeding has always been free, with willing exchange of breeding materials, such as eggs and queens, to keep colonies genetically diverse. GM bees will be big business, and will be patented.

Another high-tech fix, underway in both America and the Netherlands, is robotic bees.

When you consider that, each year, our coffee crop alone requires 22 trillion pollinator visits to sustain global production, the drone of bees takes on a whole new meaning.

And, since neither of these high-tech fixes will address wild-plant pollination, nor the cascade of animal extinctions which follow wild-plant loss, the 'fixes' are throwing nature under the bus.

However, there are some very promising, low-tech fixes currently under investigation.

Many European countries are incentivising farmers to plant wildflowers. This is an expensive option.

Another, more radical, proposal is 'farming with alternative pollinators'. This uses crop diversity and down-scaling designed to populate fields with a variety of flowering crops which generate cash (for example, herbs, cut flowers and fruit). These present a steady supply of food for all manner of economically self-sustaining pollinators. Early trials have found less pests, higher yields and increased income on farms managed this way.

In Scotland, cattle farmers have been trialing mobile ('mob') grazing. This involves keeping the herd on a succession of confined areas of fresh grass for short periods, allowing the grassland to fully recover between grazings. Besides enabling wildflowers and insects to thrive, the cattle are continually accessing longer (more easily eaten), fresher, healthier grass, they can be grass-fed for longer in the year, and each beast can regularly be checked individually for early signs of health problems (such as lameness) while the herd's being moved. The farmer has healthier, more productive animals, and fewer feed and vet's bills.


Bearing in mind that all the patentable options on the table, GM bees, RoboBees, and insect-free GM monocultures, are the ones industry will throw R&D cash at, tell your regulators to funnel some cash into small-scale, chemical-free, GM-free, sustainable alternatives, before we annihilate ourselves.

'Apidmondia', a 123-year old organisation that protects and promotes the livelihood of beekeepers, is seeking to establish bee breeding as a public good that nobody can own. This initiative, and the honey producers who will face ruin if their hives become contaminated with GM superbees, might appreciate your support.