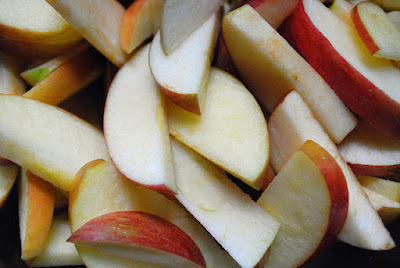 The apples carry an inconvenient label consisting of a humanly indecipherable barcode which consumers will inconveniently have to scan with their smartphone to find out what in God's name they're buying.

They are, of course, buying GM 'Arctic Apples' [1] which don't look arctic on the outside (they look green just like any other Golden Delicious or Granny Smith), but remain pristine white for a lot longer than God ever intended once you chop them up

Biotech companies are desperate for some really popular GMO product to hit the market and overcome consumer scepticism.  Arctic Apples' creator, Okanagan Specialty Fruits, say "We see this as less about genetic modification and more about convenience."

These Arctic conveniences are available in ten undisclosed locations of "a few" undisclosed Midwestern grocery chains as a trial run, with a full commercial launch planned in the fall.

The introductory period is part of a public relations exercise in which customers will be polled on their first impressions.  Since the packets aren't labelled, it's not clear if the customers polled will be aware of the GM nature of what they're giving an opinion on.  Okanagan has argued that, thanks to media coverage, most consumers will already know that its apples are GMOs.

This is an interesting position to take on labelling, because much of the media coverage has been generated by the industry itself.  Notably, the press releases continue to repeat the same old mantras: the same claims that scientists think GMOs are just fine to eat, and that most Americans have eaten GM foods (processed soya and maize, not apples) every day for decades without harm.

If these claims are intended to reassure consumers about Arctic Apples, they're fraudulent.

Many scientists have grave reservations about the safety of all GMOs, and especially about the new GM technology used to create non-browning fruit.  Arctic Apples don't have any added artificial genes generating artificial proteins like the GMOs already in the US food chain. They have added DNA which generates interference in the genome to disable the browning mechanism [2].  They are very different from all that has gone before because the product of their artificial DNA could interfere not only with unexpected bits of the plant's genome, but with the genomes of people or their gut microflora too.

Worse, Arctic apples are aimed at children and schools.

The 10oz bags of ever-white apples are modelled on the highly successful 'baby carrot' healthy snacks, and the grand plan is to replace the current very popular chemical-treated sliced apples in school cafeterias and 'Happy Meals' with GM apples.

They will be sold and eaten uncooked, unprocessed, and complete with all that man-made potential DNA-based interference intact and free to interfere with young, developing bodies.

Non-browning interference technology could be applied to any fruit which begins to look unappetising once it's been cut up and left lying around for a while: Arctic Pears and Arctic Cherries might be a reality soon.

That is, unless no one buys the apples.

If you have friends or relatives in America, warn them to look out for Arctic Apples slipping into their stores and into their children's 'healthy' school lunches.  Tell them that Okanagan's claimed 'nine years of testing' to satisfy the US Department of Agriculture before going to market wasn't testing for consumer safety, and certainly wasn't considering any long-term consequences on the next generation.  Inform them of the apples' true nature, because Okanagan and their regulators won't.  Then, tell them to make a noise about it, because getting sick isn't convenient.

As Friends of the Earth said "This apple is understudied, unlabelled and unnecessary."