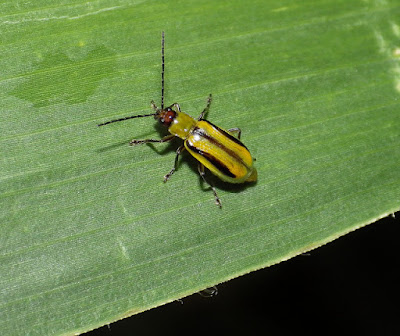 In 1868 western corn rootworm (WCR) was observed in Kansas to be a harmless chewing insect from Central America found in low populations on the Western Great Plains.

*Note the naturally low numbers, and the suggestion that these beetles can naturally travel long distances.

When centre-pivot irrigation with it's quarter mile watering radius (so efficient it's now sucking the plains dry) was introduced in the 1950s, maize monoculture madness gripped American farmers. Across the land, prairies were converted to horizon-scale corn fields.

To the WCR, which fed exclusively on corn and lay their eggs there, this became an 80-million acre banquet-plus-nursery.

The crop-spraying cavalry which charged to the rescue kept the pests at bay ... for a while. But it seems the more toxic chemicals rained down on them, the more the rootworm managed not to die. By 1964, WCR were munching their way through corn fields in every US State where corn is grown, and even when they first arrived in a new area, some of the insects were already resistant to some of the insecticides. This wasn't supposed to happen.

Where during the pre-chemical era crops were rotated corn, wheat alfalfa, sorghum and oats, and the rootworm diner only opened once every few years, now the rotation is corn and soya and corn and soya again. The rootworm still faced famine regularly enough to keep them at bay ... for a while. Then, some time during the 1980s WCR got fed up being starved out every second year and took to eating soya as well as maize. This wasn't supposed to happen.

For the next two decades, farmers doused acre after acre of their crops with high levels of broad-spectrum insecticides.

Then, in 2003, the Bt-superman flew in to save the day: GM corn which infused itself with a toxin targeting WCR. The perfect solution which kept the pests at bay ... for a while. Within six years, some pesky rootworms were getting impervious to two types of Bt insecticide, and the biotech industry was rushing to stack multiple Bt varieties into one corn plant. By 2013, three out of the four Bt traits on the market were failing. This wasn't supposed to happen.

Where we're going next is 'RNA interference' (RNAi) [1]. This is sneaky GM which doesn't use an artificial gene, but uses an artificial relative of DNA which interferes with gene expression.


We are assured that RNAi is like a Ninja, taking out only its intended victim, then disappearing. According to a Monsanto toxicologist "It's the ideal pesticide. It does what its supposed to do. Then it goes away."

However, scientific doubts have already been raised about the victim-specificity of this particular Ninja [2], and about the certainty of its vanishing trick. Moreover, it's victim may be suppressed along with the suppression of one of its genes, but isn't killed.

RNAi may be the perfect pesticide, but WCR is the perfect pest and has the evolutionary ability which goes along with that particular perfection. Also, a toxin which doesn't kill is well known for stimulating resistance. The latest GM must-have will keep the pests at bay for a while ... but for how long?

You don't have to look far to figure out where America's problems are coming from.

European corn fortunately has not succumbed to WCR on any scale: the fields are smaller, the crop rotation is more diversified and there's less dependence on corn as the be-all-and-end-all of making a living.

American farmers are yoked to a hyper-specialised commodity market dependent on an escalating arsenal of silver bullets that inevitably fail.

US entomologist and specialist in farm insects, Joseph Spencer, summed up the WCR situation nicely:


"We created this pest. We gave it a wonderful life."


When a tiny critter barely 3 millimetres long with a brain you can hardly see makes a regular habit of outsmarting you and is smart enough to cost America $2 billion a year, it's time to take a step back.

If a pest can travel a long way it will travel a long way. If you provide a pest with food as far as the wind blows, it will travel as far as the wind blows. If a pest can readily adapt to change it will readily adapt to change. If you've already tried and failed to kill a pest with multiple chemicals and multiple GM toxins, what hope is there for a GM Ninja?


"It's a lesson that we have failed to learn over and over again. Natural selection is always going to win".

And the answer? The problem is maize-monoculture, dependent on a highly restricted global market bound tightly to commodities. No amount of chemicals or genetic transformation is going to fix this system.