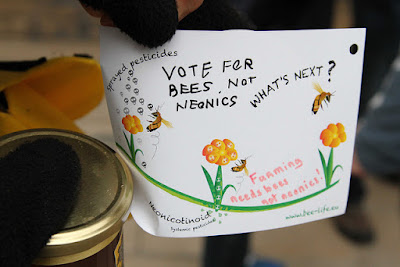 Indeed, there have been several studies demonstrating a significant reduction in the amount of chemical insecticides farmers have to spray on GM crops which provide their own Bt insecticide. These findings aren't wrong. But for the consumer, they conceal some inconvenient truths.

Even before the introduction of Bt crops, there was a trend in agriculture towards pesticidal products with higher potency (more toxic) which could therefore be applied at lower doses. Neoncotinoid insecticides which are widely blamed for bee die-off [2], are one such class of insecticide. These are applied, not as a spray on the crop by farmers, but as a seed coating by the seed suppliers.

Data collected from over 5,000 US farmers every year from 1998 when Bt maize represented some 10% of US maize to 2011 when Bt planting had risen to around 70% of the total, found that by the end of the study nearly 50% of the applied weight of insecticide was in the seed coatings.

When you factor in the seed-coating added to the insecticide sprays farmers still have to apply to their Bt crops, the pesticide reduction in these GM crops comes down to only about 11%.

If you further factor in all the Bt protein created inside these GM crops, the insecticide reduction 'benefit' of the GM crop shrinks further.

Add to this that, as the efficacy of the Bt against its target pest inevitably reduces with use, chemical applications by the farmers are bound to increase over time [3].

And then, there's the next generation Bt crops, such as SmartStax maize with its six built-in Bt insecticides, to add to the total.

Conclusion? No one can accurately claim that GM crops reduce insecticide use: they are a clear recipe for exponentially expanding the presence of both the type and the quantity of insecticide in the crop, in the environment and in your food.


No matter how you look at it, this stacks up to a whole lot of toxins in your food chain. The only difference is that farmers can't choose what insecticides to apply nor whether to apply insecticides at all, because the plants come ready packaged with them.

However, you can choose not to eat them by choosing organic.

CC photo: Give bees a Chance by Greensefa on Flickr