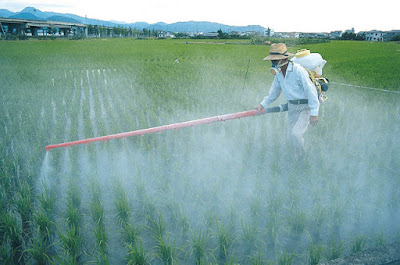 In March this year, the United Nation (UN) special rapporteurs on the right to food and on toxics presented a scathing report on pesticides.

It pointed to the "catastrophic impacts (of pesticides) on the environment, human health and society as a whole", including an estimated 200,000 deaths a year from acute poisoning alone, plus untold suffering from chronic pesticide exposure now linked to "cancer, Alzheimer's and Parkinson's disease, hormone disruption, developmental disorders and sterility".

Assessing the full extent of the problems pesticides are causing has been hampered by "a systematic denial fuelled by the pesticide and agro-industry, of the the magnitude of the damage inflicted by these chemicals, and aggressive, unethical marketing tactics".

The Crop Protection Association (CPA) which represents pesticide manufacturers in the UK insists that "Pesticides play a key role in ensuring we have access to a healthy, safe, affordable and reliable food supply". The trouble is that, as the UN report points out, pesticides are making our food un-healthy and un-safe, the poor can't afford food no matter how much pesticide is pumped into it, and as indicated by recent Chinese government studies, pesticide contamination has meant farming could not continue on about 20% of arable land. The CPA statement sounds like a good example of that 'systematic denial'.

Just as the UN report was presented, a World Health Organisation (WHO) report on "The impact of the environment on children's health" also came out. With their small bodies and developing organs and immune systems, children are especially vulnerable to all forms of pollution. The WHO recommendations included the need to promote good nutrition, and the need for agriculture to reduce the use of hazardous pesticides.

Interestingly, the UN report also mentioned the efforts of the Monsanto Tribunal [1] to raise awareness of the dangers of pesticides, to encourage the banning and phasing out of hazardous pesticides, to promote agroecology, and to place strict liability on pesticide producers.


What all these bodies are up against, however, is the key role pesticides play in the growing of commodity crops: these are fed to animals, cars, the materials industry, and the processed food industry. In other words, the crops are designed to nourish everything except people. Also, as one 25-year Environmental Protection Agency (EPA) veteran pointed out, the chemical pesticide industry, quoted as being worth $40 billion in 2014, is entrenched in America because


"For decades, industry lobbyists have preached the gospel of unregulated capitalism, and Americans have bought it. Today, it seems the entire (US) government is at the service of the private interests of America's corporate class" [2].

GM crops are, of course, playing a key role in perpetuating and exacerbating this entire situation.

The rise and rise of glyphosate-based herbicide use on glyphosate-tolerant GM crops led to a 23-fold increase in its application from pre-GM days to 2007, with further increases since. Science now recognises that glyphosate can persist and accumulate in many environmental conditions. Add to this the current move to marketing GM crops tolerant to several other herbicides besides glyphosate.

Then, there are the 'hidden' insecticides generated in no-spray 'Bt'-toxin producing GM crops, now increasingly transformed to produce several Bt-proteins at once, plus the even more hidden 'RNA interference' insecticidal GM crops about to hit the market [3], plus the use of highly potent insecticidal seed coating which seem to go hand-in-hand with GM crops [4].


This doesn't paint a very pretty, nor sustainable, nor healthy picture. Post-Brexit, the Westminster Government may well slot Britain into the US agricultural model. Draw the government's attention to what the UN and Monsanto Tribunal are saying, before we're sucked into those 'private interests of America's corporate class'.