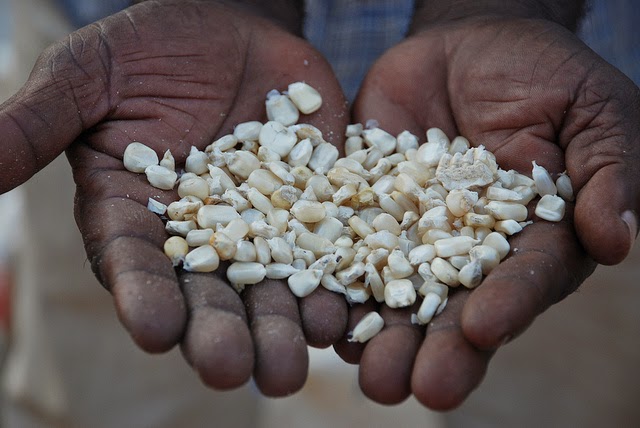 Another piece of unique and very disquieting science was published late in 2014.

The study modelled a real-life situation in which the subjects were eating an unknown mixture of all the GM foods on the market. It was designed to investigate how a practical and relevant post-marketing safety monitoring scheme might be structured.

Laboratory rats were fed standard rat chow which, as expected, tested positive for GM content. Standard chow consists of 60 percent yellow maize and 34 percent soyabeans: given the scale of feed crops which are now GM, the rats' diet was probably more than 90 percent GM. This means the rats were actually eating a mixture of:

Like the real-life human situation , the 'non-GM' comparator group weren't eating non-GM maize or non-GM soya (there would never be any such population available): instead they were eating another grain (wheat) which provided the equivalent nutrition and tested negative for GM.

Noting that "most short- and medium-term (animal-feeding) studies with GM foods indicate that they might cause health hazards", the Egyptian team chose three key organs to study: the liver and kidney as major organs of detoxification, and the testis which is highly sensitive to toxins.

What the Egyptian team found was significant biochemical markers for disease, evident tissue pathologies, and chromosome breaks in all three organs after all three GM feeding durations. Evidence was also obtained that the GM-fed rats' livers were processing toxins, and that adaptive tissue changes to protect the integrity of sperm chromosomes were rapidly deployed.

The authors pointed out that, although many GM feeding studies have revealed no noticeable impact on animal health, this may be attributed to the use of a GM-feed content of not more than 33 percent of the diet, and sometimes as low as 0.1 percent.


As has been highlighted before [2], another explanation for the lack of impact on animal health in many GM feeding studies is that the control animals may also have been fed GM. What we mean is that if GM soya was being tested, the non-GM soya-eating control animals may still have been eating GM maize, and if GM maize was being tested, the non-GM maize-eating controls may still have been eating GM soya. Inclusion of historical data or data from other experiments as additional 'comparators' may lead to false negative results for the same reasons.

Bearing in mind that these experimental animals were getting nutritionally optimised food specially formulated "to support ... growth and maintenance" which humans rarely are, and that laboratory rats never live very long lives which humans often do, the harmful effects of a real-life, mixed GM diet on us is likely to be a lot worse.

This study raises the question of GM elements working synergistically to damage our health. It suggests the testing of single GM crops is of limited usefulness in assessing their real-life safety.