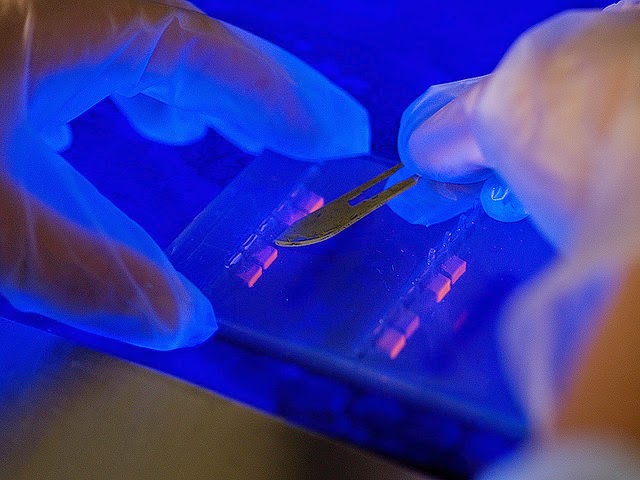 While the insertion of artificial genes into our food crops continues to raise safety issues, the next 'layer of technology to customise life' [1] promises to be as problematic. It also promises to be well-concealed. That's if the biotech industry can get away with it.

The up-and-coming thing in the world of biotech is 'gene editing'.

This involves a chemical tool designed to invade the genome, dock with a selected part of it, and make a change in the genome in a specific way (e.g. add or remove a section of DNA, or alter a bit of its code), after which the 'tool' is disassembled by the cell.

Needless to say, modifications which don't involve the old-style insertion of genes plus on/off-switches and markers etc, can be sold to the market as "basically comparable" to conventional breeding (Dupont Pioneer), or as natural mutation speeded up, or as like old-fashioned chemical- or radiation-induced mutagenesis but with precision ... in fact, just about anything but GM.

On this basis, one US seed company which nearly closed its biotech programme after a GM grass escaped disastrously into the wild during trials, now has "a stunning array of products that are not regulated" because they're "not" GM.

As the Austrian Agency for Health and Food Safety spelled out in a recent paper, genetically-edited organisms (GEdOs) present a regulatory nightmare. Regulation requires identification. Without this, implementation of testing, labelling, tracking and safety-monitoring becomes unrealistic. GEdOs are even more problematic because the permanent DNA changes can be so small that they can be assumed (note assumed) to be ones which could arise naturally. Even if the DNA mutation is detected no one can prove it didn't arise by assumed Darwinian-style chance.

America has never had specific GM regulations and, while some GMOs fall within the scope of other controlled materials such as pesticides, plant pests, plant pathogens, or plants with substantially changed nutritional content, it's very easy for companies to find technical loopholes to escape regulation. GEdOs are very loop-hole-shaped.

Europe, which has extensive GM regulation, is now scratching its head over genetically-edited organisms. Obviously it's under pressure from the US to consider GEdO products as non-GM and to grow them and to market them without regulation or labels.

One biotech scientist who, tellingly, wishes to remain anonymous, has said:

"The genome editing companies and some academic scientists are showing naivety at best and blatant narrow mindedness at worse in believing their 'targeted' genome alterations are predictable in outcome. It shows a lack of understanding of the complex networks that are gene, protein and biochemical reactions. In the absence of proper molecular analysis, they can make claims about precision and predictability, but they should be challenged to publish the data to prove it."

He has challenged the creators of genetically edited crops to conduct a "through molecular profiling 'omics' analysis"* comparing their GEdO to its non-GEd parent.

Put another way, biotech industry claims of 'substantial equivalence' must be backed up by published 'omics'* data to prove it.

*Note. 'Omics' refers to several recent techniques for profiling the entire complement of various classes of biochemicals in a living cell, for example, the RNA produced by DNA expression, proteins, metabolic products.

Let's be clear. No matter what you call it (transgenesis, cisgensis, intragenesis, genetic modification, genetic engineering, genetic editing, site-directed mutagensis ... ) all these techniques are artificial means of invading and altering the living genome. All of them are designed to evade the cell's mechanisms for self-repair with which protect its health.

Although they're habitually referred as modern plant 'breeding' techniques, sexual reproduction (with its inbuilt genome-sharing and genomic health-preserving features) is circumvented in all forms of artificial DNA change. Healthy reproduction involves intelligent change resulting in a balanced and fully interactive genome in the offspring. Artificial genome changes are, by definition unintelligent, and any such disruption may compromise the novel organism's health and resilience.

GMOs, by any name, have been uncoupled from their homeostatic and evolutionary potential. This augurs catastrophe for the food supply of future generations.

Do our children and grandchildren really need an ever-more compromised food supply?

Tell your MEP a.s.a.p. that all forms of artificial genome invasion and change need to be considered 'GM' with comprehensive safety testing, tight regulatory control, and full monitoring.
Background