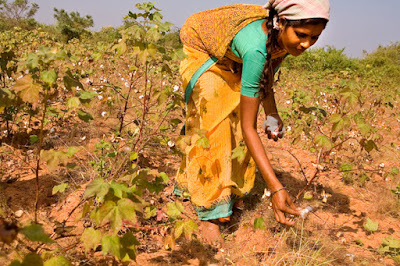 An anthropological field study during the years 2012-2016 surveyed what was going on down on the commercial smallholders' farms in five villages in India [1].

In the face of the limited advantages of growing GM cotton, and some serious disadvantages, plus a global glut of cotton, Bt insecticidal GM cotton still represents over 80% of the crop. The study therefore raised the question of why Indian farmers remain so devoted to biotech cotton? It seems to boil down to fashion and male pride: a GM crop shows you're modern, while an impressive stand is public proof of a good agricultural ability (even if the quality of the produce and the cost of inputs mean reduced profitability).

A small-scale field-based study undertaken in 2018 interestingly complements this earlier survey. In particular, the new study took a gender-specific perspective, aiming to reveal the roles and voices of women farmers. Interviews were carried out in an informal setting to facilitate talk and so hear unhindered stories from a sector of the Indian population not often heard.
Men and women farmers in India have clear roles: the men choose and buy the seed and other inputs, plough and prepare the land, and transport the harvest to market for sale; women do most of the agricultural work including sowing, weeding and harvesting of the cotton bolls (as well as all the household work and caring for the family).

One cynical old lady declared "Women do all kinds of work in the home and in the fields, men plough and sleep ... Men also do marketing of the cotton harvest, in order to keep at least one-third of sale money for their drinking and other such purposes."

The men are seen as having scientific and technical knowledge about Bt cotton gained through social and technical interaction with biotech promoters, seed agencies and their male farmer peer group. This all-powerful patriarchal ideology in rural and indigenous India suits the biotech industry purpose very well. The cold reality is that:

"women's knowledge of agricultural production has been deprivileged and delegitimised by powerful agricultural academic discourse (largely masculinist) that operate in the ways similar to the corporations."

Perhaps there's nothing really new, or unpredictable, about this picture of Indian farmer social structure. However, information emerging from the women farmers' unmuted voices on health effects, hasn't previously been highlighted. Bear in mind that the women work in the fields throughout the day where they are directly handling, or are in constant close proximity, to the GM plants along with their GM Bt toxins plus whatever agrichemicals have been applied there. They reported a number of adverse health consequences of working in the Bt cotton fields: persistent skin rash, blackening of toe nails, irritation and itching of eyes, and prolonged chronic coughs. Tellingly, although these conditions were first stated by women, in subsequent discussions, men too agreed with these health problems.


Pride and peer-pressure, it seems, won't let the men farmers admit there's anything wrong. This is an important point because the authorities would listen the them if they spoke out and then the biotech industry might not get away with so much. Remember this tale next time you hear the GM industry insisting its crops are proven good by the number of farmers growing them: the situation in India suggests industry just knows how to manipulate its customers.

On a brighter note, the women’s' perspective study was carried out in the hope that it would generate research interest in the concerned academia and in the numerous civil society organisations engaged in promoting organic production and consumption. In polls elsewhere women are significantly less confident about the safety of GM and are more supportive of organic production than men. If anything's going to cause a shift away from high-tech agriculture and towards agro-ecological methods, it might well be led by the women.