A succession of sick pigs? 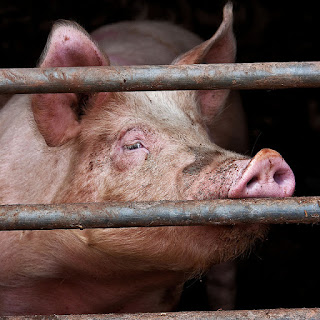 In a re-run of the GM wonder-crop revolution which promised weed-free fields growing pest-free crops, it looks like we're getting a GM wonder-pig revolution of disease-free herds (soon to be followed by flocks of GM wonder-hens and shoals of GM wonder-fish).

Scottish scientists have modified pig genes to "massively increase resistance and resilience to infection". The first targets are 'Porcine Reproductive and Respiratory Syndrome Virus' (PRRSV) which causes breathing problems and leads to still births and stunted offspring when sows are infected, and African Swine fever.

Once scientists had identified the pig gene which creates the receptor on the surface of cells that the virus binds to to gain entry, they were able to change the structure of that receptor and close the door on the pathogen.

It's anticipated that the GM wonder-pigs could be approved for use on farms within three to five years after which several generations of breeding will be required to introduce the engineered gene into pedigree herds.

COMMENT Note that there's no mention of, nor time allowed for, safety testing of a GM product you will be consuming directly.

The announcement of the impending disease-free GM livestock was accompanied by the usual PR exercise. Although no one seems to have told the public, apparently their opinion has "warmed" and is "slowly coming round to the idea" of eating GM animals. Then there are the usual plugs (all of which miss the point that any form of artificial genome changes disrupt the integrity of gene function and interactions): we are assured that modern GM is "more precise" with less likelihood of side-effects than the old kind you've been expected to eat for the last two decades; and that "There's nothing foreign introduced". This is followed by the usual emotional tugs: GM improves animal welfare and lessens environmental impact, and always remember all those stunted, starving, malnourished African children who need meat.

In a curious lapse of good journalism, the Guardian failed to counterbalance its article on GM wonder-pigs with any alternative views. However, a senior research fellow at the Centre for Agroecology in Coventry University was quick to respond:

"We know that healthy, agroecological, farming systems support healthy animals and plants that are then, by and large, resilient to disease. The solution for a sick animal is not to edit genes, because this does not address the cause of the problem and only makes it worse, as the ill health will only find a different way to express itself. In the meantime we are supporting unhealthy farming systems and their associated diseases, and consuming sick pigs."


The GM wonder-pig reality is that "This isn't contributing to health or welfare, or saving money, but it keeps farmers lurching from one disaster to another and keeps them dependent on new technology".

Sadly, the underlying problem is that scientists are trained to take a reductionist approach to science which supports the industrial mindset which led to the unsustainably sick livestock in the first place.

No one seems to have told the scientists that viruses can and will mutate faster than they'll ever be able to install gene changes in the livestock.