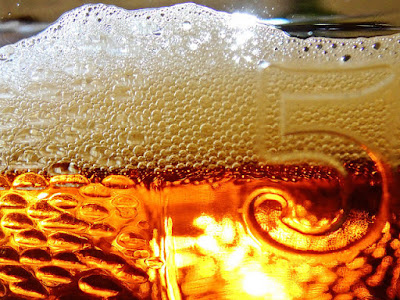 Craft beer brewing is an art form whose products are fast gaining in popularity. Typically, a craft brew is tastier than industrial versions because it uses far more hop flowers whose complex essential oils impart the characteristic beer flavour and aroma.

The variability of hop flowers make them an irritation to big brewers because their market demands uniformity, their factories demand recipes, and art is beyond them. Hops are also expensive. But the other vital beer-ingredient, yeast, is cheap.


Genetic engineers in California have the answer: forget the hops. Just create GM brewers yeast with a couple of extra genes to generate the enzymes to generate look-alikes of a couple of the main essential oils and bob's your uncle: a brew with a beer-like flavour and alcohol.

The novel enzyme-creating genes were copied from the traditional culinary herbs, mint and basil, and there were a couple of extra yeast genes added in too to make everything work. All of which makes it sound like a beer with nothing really unnatural or synthetic; indeed a very safe beer.

However, what had to be done to the yeast to force it to produce proteins and essential oils it didn't actually want or need was more complex. Yeast naturally produces the precursors to the essential oils required, but it does so in a tightly regulated way. To achieve an artificial accumulation of the precursors needed, this natural control has to be by-passed by artificial genes.

Presumably, all safety tests were by-passed too because in taste-tests the novel beer-like beverage was described as "hoppier", "grapefruit-like", with shades of "fruit-loops and orange blossom".

Hoppy GM yeast will be easy to sell to industrial brewers: it's cheap and promises to convert their taste-deficient brews into ersatz craft beers. Consumer "trepidation" of GM will, it is hoped, be overcome by the environmentally-friendly ticket attached to the beer: a reduction in water use (reportedly one pint of craft beer requires 50 pints of water just to grow the hops), a reduction in the land area put to growing hops, and a reduction in the energy needed for processing, transport, and storage of the hops.


We're talking about a GM micro-fungus related to lot of diseases, with a very out-of-control disturbed physiology. It will be consumed in large volumes. It will be discarded into the environment in large quantities. It could spread itself about inside and outside you with the ease typical of all yeasts. And no one's got any notion of safety-testing it. Don't drink it.