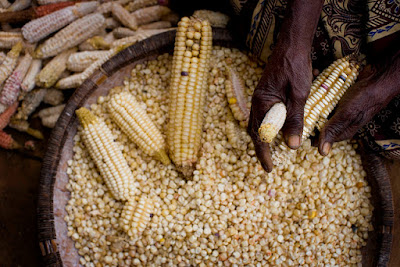 'Food security' is a complex problem for which simple solutions have long been tried, and as long have failed. In fact, 'food security' isn't even easy to define.

Prior to the 1980s, the problem seemed straightforward: just add together all the food produced in the area of interest, add net food imported, and divide the total by the number of people living there. If there were enough calories available per person, the area was 'food secure'.

It became obvious, however, that there were famines side-by-side not only with abundance in the markets and but even with on-going food exports.

Attempts were, therefore, made to frame food security in terms of access on a local level: food grown, bought, or gifted, and the role of money (or absence thereof) in the equation. But, despite this recognition that food has to make it into the hands of the hungry before it will relieve any hunger, the focus stubbornly remained on the supply side of the problem.

In the twenty years leading up to the GM era, traditional policies of producing as much food as possible within the borders of your own country were deemed costly and inefficient, and fell out of fashion.

The scene was thus set for GM crops to feed the global markets and be hailed as the answer to food security. Food price shocks in the mid-2000s further boosted GM crops' PR-inspired image as critical to the solution to hunger.

So, where are we now?

The principle GM crops in the world today (soya, maize, cotton and canola) aren't consumed directly by people. They are heavily processed and used to feed animals, the processed and junk food industries, the materials industries, and cars. Feeding the poor isn't lucrative, feeding the American market is. All commercialised GM crops to date are extensions of the chemical approach to agriculture, they either tolerate herbicides, or generate their own insecticides, or both: they're designed to suit American high-input, high-production, highly mechanised farming systems, geared to global commodity crops which don't actually feed anyone.

The reality of' 'Feeding the hungry' with GM crops has so far amounted to disrupting local food supplies with cheap (subsidised) GM imports, and attempts to introgress artificial genes from US labs into local crops which change crop qualities and reduce their diversity, possibly, forever.

Chuck Benbrooke describes "The myth that GMOs are the answer to feeding the world" as "both silly and juvenile". The necessary scale, the (direct or indirect) commercial control, and the shear cost make GM crops intrinsically damaging to food security.

So, what's the answer to food security, feeding the hungry, and poverty, all of which are inextricably linked?

One thoughtful professor of geography has pointed out the promise of agroecological approaches to food production, such as crop diversity and rotation, inter-cropping, agroforestry, and integrated crop and livestock systems. He also describes collaboration between scientists and local people as the key to unlocking this potential.

There are three obstacles to the agroecological solution to feeding the world.

First, there's no commercial value in agroecology for big corporations to tap into: no patents, no chemicals, no scale. This means political will and local, public funding are needed.

Second, the "pernicious and dangerous ... mountains of slick PR from the biotech industry" bombarding the media and politicians. With sufficient repetition, the myth that GM will feed the world will begin to settle in as accepted truth and drown out any alternative mind-sets.


The best place to start is at home: lobby your MSP and MP to direct research funds to agro-ecology for Scotland and the UK. Don't let them fall for GM industry propaganda, or sit by complacently while industry vultures devour the poor farmers they claim to be saving.