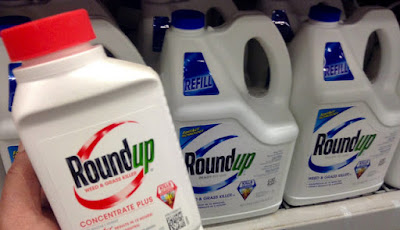 A snapshot survey of European agricultural soils in 2015 has revealed a worryingly extensive presence of glyphosate herbicide and its break-down product, 'AMPA'*.
*aminomethylphosphoric acid

Glyphosate is widely used on GM herbicide-tolerant crops in the Americas, but in Europe, it's typically applied only once a year to cereal and oilseed crops, or three times a year in orchards and vineyards. This doesn't sound like very much.

Glyphosate is supposed to degrade rapidly in the atmosphere when exposed to sunlight. The Glyphosate Task Force (GFT), a consortium of biotech and other industry stakeholders with significant influence in EU regulation, assures us that glyphosate dissipates within days or at most a few weeks after application, and that very little makes its way into surface water or into non-target plants.

However, none of these claims seem to be supported by the science: glyphosate and AMPA are measurably present in our air and water, and can be washed out of the atmosphere; persistence of both pollutants in the soil can vary from a few days up to two years depending on the environmental conditions; and glyphosate-laden dust doesn't seem to figure in the GFT awareness. Glyphosate is in 45% of European topsoils, in 60% of UK bread, and in more than three-quarters of German bodies (also, see [1]).

The reality of the situation in European soils was revealed from the analysis of 317 soil samples collected in areas known to have a high pesticide use in eleven EU Member States, one of which was the UK. Of these, 45% were contaminated with glyphosate, AMPA or both. The authors pointed out that most such residues remain close to the soil surface, and that because the samples reached a depth of 15-20 cm into the soil, the readings could be significantly diluted and therefore underestimated.

The biggest concern about these findings is that studies elsewhere have confirmed the reality of wind-driven glyphosate and AMPA attached to dust eroded from the surface of top-soil. Fine, airborne particles can be directly inhaled by humans.

Pesticides also end up in water. Analyses of tens of thousands of surface-water samples in Europe have found widespread contamination by glyphosate (33%) and AMPA (54%), while tests showed 10-13% of rainwater samples were contaminated.

It's an important pre-requisite to the licensing of glyphosate-based herbicides in the EU that they should not adversely affect the environment or human and animal health. Doubts have already surfaced over glyphosate's 'favourable safety profile' as studies have linked the herbicide to cancer and endocrine disruption in humans, and to harmful effects on vital soil organisms including earthworms, beneficial bacteria, and fungi, besides weakening plants' resistance to pathogens. In the face of repeated dousing with glyphosate, soil quality and biodiversity assessments certainly require much "greater effort".


North and South American farmers are overwhelmingly dependent on glyphosate for their herbicide-tolerant GM commodity crops, and even the largely GM-free EU has an agricultural model over-reliant on this chemical and an animal feed supply chain over-reliant on overseas GM glyphosate-treated crops.

Getting glyphosate out of our environment, food and ourselves is going to require a redesigning of our farming system, and a shake-up of our glyphosate-blinkered mindset. This isn't as hard as it seems: one firm, hoping to capitalise on the increasing restrictions on glyphosate use, is selling a foam and hot water weed treatment already being used by half of the UK's water companies and several local authorities. Its CEO says


"There is a huge amount of scaremongering which says that viable alternatives are not available and it is simply not true".

Probably as simply not true as the assurances of glyphosate's safety we are being given by the agrichemical and biotech industries.

Remember all this next time you're told to eat up your daily glyphosate.