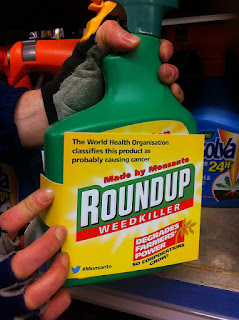 If you're wondering why glyphosate herbicide is still legally present in your food and in GM animal feed when the World Health Organisation’s International Agency for Research on Cancer (IARC) has found it "probably carcinogenic to humans", some light was shed on this by the evidence heard during the 'Monsanto Tribunal' held in October 2016 (see below).

The IARC looked at experiments on mice fed glyphosate. In one life-time study, they saw significant increases in kidney tumours, and in another they saw increases in blood vessel cancer. They also noted increases in malignant lymphoma (blood cell cancer) in a further three mouse studies, but these were only mentioned, not included in the final report, because they were non-peer reviewed industry studies whose details couldn't be ascertained.

An IARC classification of 'probably carcinogenic' was unwelcome because it's only one short step away from "presumed carcinogen" which would, under EU law, trigger an automatic ban unless exposure levels were "negligible" (and this doesn't mean 'below permitted levels').

Accordingly, the two key bodies enabling the approval of glyphosate in the EU, the European Food Safety Authority (EFSA) and German Federal Institute for Risk Assessment (BfR), didn't hesitate to reassert their previous positive opinions. These were based on the same five mouse studies. The EFSA peer review of the risk assessment claimed "No evidence of carcinogenicity was observed in rats and mice", while the BfR stated the IARC classification for carcinogenicity was not warranted.

How had so many apparently objective scientific assessors ostensibly working in the public interest seen such different evidence?

A former industry toxicologist who now works for Pesticide Action Network Germany has no doubt that all five of the mouse experiments showed a statistically significant increase in one or several types of tumour in male animals (that's 100% of the studies of an uncommon disease). Three of the five mouse experiments (that's 60% of the studies) found a significant increase in malignant lymphoma, a finding reflected ominously in human epidemiology. A clear dose-dependent relationship was present in two of the five studies (that's 40% of them).

Under pressure from the IARC report, BfR admitted that all the tumour findings were significant, but declared them "equivocal" because if you change the method of statistical analyses you can successfully reverse the outcome.

Put another way, if you apply the more powerful statistical test preferred by the Organisation for Economic Co-operation and Development (OECD), which sets guidelines for industry testing of chemicals, glyphosate is linked to cancer. But if, like the BfR, you ditch this in favour of a less powerful statistical application, the link disappears.

The toxicologist pointed out that the OECD clearly states "significance in either kind of test is sufficient to reject the hypothesis that chance accounts for the result."

A German TV investigation revealed that, despite repeatedly confirming in writing that it performed an independent evaluation of the studies, the BfR actually relied entirely on glyphosate's manufacturers' reports, including their statistical analyses.

So, there you have it. You're eating a probable carcinogen which is probably a presumed carcinogen because industry doesn't follow the official guidelines on statistical analysis, because EU regulators can't do their own statistics, and because the regulatory body which proposed glyphosate approval in the EU is happy to play off one statistical method against another (in contravention of official guidelines) to avoid finding its baby carcinogenic.

For information on the people who brought the Monsanto Tribunal together, the judges, and some very telling video clips of the proceedings, check out www.monsanto-tribunal.org/.

The Monsanto Tribunal is an international civil society initiative to hold Monsanto accountable for human rights violations, for crimes against humanity, and for ecocide. Eminent judges heard testimonies from victims, and will deliver an advisory opinion following procedures of the International Court of Justice.