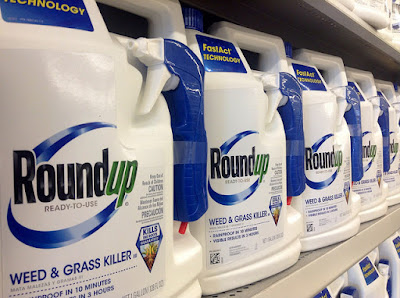 Despite the biotech lobby's best efforts to suppress the bad news, adverse findings continue to flow from Gilles-Eric Séralini's life-long study of rats fed Roundup herbicidal formulation (active ingredient glyphosate) and the Roundup-resistant GM maize it's sprayed on [1,2].
This study found signs of anatomical pathologies plus blood- and urine-biochemistry indicative of liver and kidney dysfunction after exposure to Roundup.
Molecular profiling, the latest thing in tissue analysis, has been applied to the livers of the Roundup-fed rats. The results confirm the evidence of glyphosate-induced liver disease first observed in the 1980s and since backed up by a growing body of evidence.

Profiling showed that 11% of the proteins detected in the rats' livers were significantly disturbed, and that 8% of the small biochemicals generated in their livers were altered.
These changes were consistent with a liver processing, and becoming damaged by, a toxin.
Of particular concern was the fact that the molecular disturbance "showed a substantial overlap" with biomarkers known to indicate 'non-alcoholic fatty liver disease' (NAF) and its long-term progression to scarring, localised tissue death, swelling and serious disease (see below).
NAF liver disease is a bit of a mystery: it's an abnormal accumulation of fat in the liver and is often associated with risk factors such as obesity, diabetes and high blood cholesterol, but is also seen in people with no known risk factors. The condition affects about a quarter of the US and European population.
While the study establishes a role for Roundup in NAF liver disease, it doesn't provide any insight into the mechanisms involved. As the authors point out, there could be multiple routes to the liver pathologies induced by Roundup. These include hormone-disrupting effects, impaired cell energy production, and compromised digestive-system health due glyphosate's antibiotic properties.
These concerns about Roundup are certainly not trivial. The rats in the experiment were drinking the herbicide at environmentally relevant doses, half the admissible concentration in the EU and 1/14,000 of the admissible concentration in the USA. Glyphosate-based herbicide residues are routinely detected in food and drinking water, and what little epidemiological data we have suggests glyphosate and its derivatives are widespread in the body. NAP liver disease "is predicted to be the next major global epidemic".
The inevitable, thorny, question arises of how much of the disease is caused by the active ingredient, glyphosate, and how much is caused or exacerbated by the co-formulants in Roundup as actually applied.

No doubt, many other factors in our environment are contributing to NAF liver disease, but such a ubiquitous extra nail in our coffins we can well do without.
The most shocking thing is that although the liver-disease-glyphosate link was suggested by science 30 years ago, with mounting evidence ever since, it still hasn't been fully investigated.
Tell your MP, MSP and MEP, it's time to remove glyphosate-based herbicides from your world completely, along with the GM crops designed to accumulate such weedkillers and poison your liver.
Background:
[1]  GM MAIZE IS NOT SAFE TO EAT - October 2012
[2] BENDING THE TRUTH ABOUT CANCER - December 2012