The curious case of the useless rice 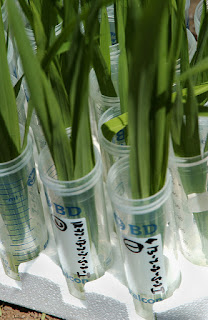 Much has been made of the philanthropic nature of GM 'golden' rice. The idea is that, as a public research project, locally-adapted varieties of the vitamin A enhanced rice will be made available free of charge to subsistence farmers in developing countries as part of a co-ordinated humanitarian effort. In this way, the yellow-coloured self-supplementing rice will be grown sustainably by those who need it most, and the widespread ill-health and blindness caused by vitamin A deficiency (VAD) will be consigned to history.

The Golden Rice Project is apparently being co-ordinated by the Humanitarian Board on golden rice ('HumBo') initiated by the Rockefeller Foundation. The Board's members also include the scientist-fathers of the novel rice, USAID, the International Rice Research Institute (IRRI), an Indian government biotech representative and a global marketing expert. A very fancy team indeed, but where's the rice?

As the decades pass and governments in countries where there's the will have slashed VAD with programmes of supplements, education and dietary diversity [1,2], golden rice doesn't seem any nearer the farmers' fields.

The genetic trick biotech scientists are trying to pull off is to persuade rice to produce 'carotenoids', substances which are the pre-cursors of vitamin A, in the grain. All green plants produce carotenoids as these are part of their photosynthetic machinery, but rice grain doesn't photosynthesise and doesn't need them. First generation golden rice, 'GR1', was transformed with two daffodil genes and one bacterial gene to try to kick the dormant carotenoid-creating biochemistry into motion.

When these artificial genes failed to produce meaningful quantities of carotenoids in the grain, one of the daffodil genes was replaced with a more active maize gene to form second generation golden rice, 'GR2', which can generate several times the carotenoids of GR1. So as not to interfere with the vital photosynthesis in the leaves of the rice, the artificial genes were attached to specialised promoter DNA to make sure they were active in the rice grain only.

Indian Agricultural Research scientists selected one of the GR2 events and bred it into an Indian mega rice variety called 'Swarna'.

Within two generations of back-crossing with the Indian rice, they achieved plants with the GR2 event in a 96% Swarna genetic background.

Subsequent breeding generated GM Swarma plants which had two of the novel DNA constructs in their cells (i.e. the artificial genes were on both paired chromosomes). This gave their new GM strain a maximum potential to produce the desired carotenoids and promised a crop that would breed true.

The Kaybonnet event selected by HumBo for free distribution in the public sector because of its high carotenoid production, had resulted stunted plants with pale leaves and poorly developed flowering parts. What had caused these abnormalities was not investigated, but it was apparently assumed that the unwanted characteristics would somehow disappear when the artificial genes were moved into a new genetic background.

Besides all the same above-ground failure to thrive just like the GM Kaybonnet, the roots of the new GM Swarma behaved like lost souls: they a showed an initial lack of direction in their growth (they couldn't find their way down into the earth) and then grew excessively long.

Noting that all these abnormalities indicate an imbalance in plant hormones, the Indian team took a closer look at the host DNA in which their free artificial genes had inserted.

They found that the golden rice genes had landed right in the middle of a native gene for 'auxin'. This substance is a key plant hormone which interacts in highly complex ways with the production and actions all other plant hormones, all of which must work in a fully co-ordinated way for a healthy plant.

Further molecular investigation of the golden rice that's clearly never going to feed anyone, revealed something even more worrying because it may have wider implications for golden rice in general: the technical trick used to switch on the artificial genes in the grain had 'leaked' into the whole plant. This side-effect was the likely cause of the loss of green colour in the leaves: because carotenoids and chlorophyll (green pigment in plants) are both derived from a common precursor, the novel genes activated in the wrong location will hijack the precursor to produce carotenoids instead of chlorophyll. Chlorophyll is, of course, what harvests sunlight energy to create the sugars which feed first into flowering and then into grain production in the plant.


We couldn't help noticing that the apparent, politically neutral, conclusion in the paper's abstract (the only bit most people read) is that the study demonstrates the importance of the plant auxin gene. The authors' conclusion at the end of the paper, perhaps, reflects the Indian scientists' irritation at having wasted so much time and money on a useless GM rice: they point out that the transformation event supplied by HumBo was unfit for commercial cultivation, and that event characterisation and selection should be carried out before any golden rice is distributed for further pre-commercial development.

The technique for creating the golden rice used a GM bacterial plant-pathogen to infect the genome with the artificial DNA. This method is claimed to lead to random insertion of the novel event in the host genome. However, studies published as far back as 2002-2004 suggest that 35-58% of such insertions happen within gene sequences. Since genes form a very small proportion of the genome, this doesn't look very random. Molecular geneticist, Michael Antoniou, comments


"I have always asserted that the GM transformation process as used in the development of GMO crops selects for the insertion of the GM gene into active regions of the genome (areas where plant host genes are switched on and functioning). This bias in the GM gene insertion into active regions therefore maximises the possibility of disrupting the function of one or more host genes, with potentially adverse effects such as poor crop performance or even toxicity".

If it proves impossible to reliably prevent the artificial gene expression 'leaking' into the whole plant, all golden rice will suffer from failures due to chlorophyll- and photosynthetic-insufficiency.

Indeed, plant physiology disruption by GM seems the norm. Developers of biotech crops simply aren't taking the implications of such disruptions seriously. Nor are they taking seriously the risk of a biologically-active and damaging vitamin A-related substance arising due to the disruption [3,4].

How philanthropic is it to be wasting valuable scientific expertise and limited funds with 'free' golden rice events which haven't even had the most basic checks on their molecular fitness?