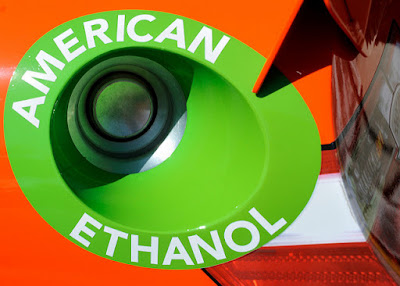 In 2011, the first GM maize created solely for industrial purposes was approved for cultivation by the US Department of Agriculture (USDA).

'Enogen' maize has incorporated a bacterial enzyme, 'alpha-amylase', which digests starch to produce sugar. Conveniently, this enzyme can be used at the high temperatures. This makes it useful for the production of ethanolic fuel to make American cars greener.

Up until the introduction of Enogen, the first stage of converting maize to ethanol was to mix in liquid amylase under carefully controlled conditions. Now, as little 15% of Enogen maize in the feed-stock is enough to efficiently decompose all the starch present* without further ado.
Enogen's maker, Syngenta, could confidently list the advantages its GM self-digesting maize has compared with the maize/enzyme mixing process previously needed:
As Syngenta points out, this adds up to a process flexibility and efficiency which reduces ethanol production costs, raises profits, and benefits farmers.

Enogen is a GM version of the 'yellow' maize used for animal feed and for processed food ingredients. Corn flour used directly for food is 'white' maize. Realising that self-digesting white maize would be very bad news for the food industries which depend on it, Syngenta was quick to reassure consumers that it would take "various measures" to prevent the corn from getting into the food supply. These 'various measures' seem to rely on restricting Enogen cultivation to areas in the vicinity of the ethanol production factories, and adding a purple tracer to offer growers and handlers a visual aid to ensuring the GM grain is properly segregated from planting to delivery. Other 'various methods' include a "closed-loop system" using contracted growers following a "comprehensive stewardship program to prevent commingling" and unspecified "other steps" to limit cross-pollination".

Note that cross-pollination was to be 'limited', not prevented.

Alpha-amylase is already approved for use in food processing, so the possibility of it drifting into the food chain via wayward Enogen genes was never a food safety issue.

Even in 2011, before Enogen entered the fields, the normally pro-biotech Millers Association which represents industry giants like General Mills, ConAgra Mills and ADM Milling, was raising objections to the GM corn. It pointed out that Syngenta's own data indicated that as little as one amylase-generating kernel mixed with 10,000 conventional kernels (0.01%) could be enough to weaken the structure of the starch necessary for successful cooking. The Association warned that GM contamination of white maize would lead to "crumbly corn chips, soggy cereal, loaves of bread with soupy centers ..." and to disrupted exports.

The reality, five years down the line, is that nine US states are growing Enogen:


"There are a lot of ethanol plants and lots of white corn. And those don't mix. That equals a train wreck." (Organic farmer, Nabraska).

Lots of white corn is growing right next to lots of Enogen and getting contaminated by its GM pollen.

Grain dealers using GMO strip tests are finding Enogen where it shouldn’t be. Growers of value added food-grade corn face market rejection if it has alpha-amylase genes, and can then only sell it to a cheaper market such as for animal feed, or ironically, ethanol production.

This year it's happened again on a bigger scale. The tamales turned out gooey, fell apart, and even made some people sick. No testing has been carried out on the suspect flour.


After the StarLink fiasco in 2000 when GM maize approved only for animal feed (due to allergy concerns about the 'Bt' insecticidal protein it contained) turned up in 300 food products and in at least eight countries all over the globe, you'd think the biotech industry and regulators would have learned some basic plant biology.

You'd also think that reports of people made sick would have the US public health authorities rushing to investigate. It seems not, despite the possibility that Enogen-contaminated maize in storage may be prone to harbouring infectious and possibly toxin-producing diseases cultured in the sugars emerging from the enzymic breakdown of the starch.

Who needs safe food when you can be proud to drive your car on green fuel?

* Enzyme molecules facilitate specific changes in the chemicals around them without themselves being changed and so a small amount will continue to act until they run out of materials to change.