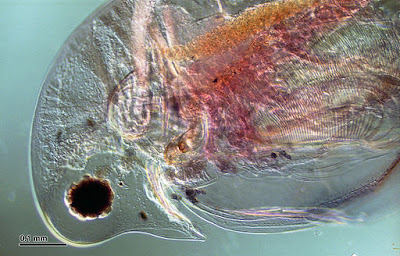 GM maize, 'MON 810', has the third highest number of regulatory approvals globally.  The transgenic plants generate a look-alike bacterial protein, 'Cry1Ab', one of the 'Bt' insecticides, which targets specific pests.  Cry1Ab was the first GM insecticide to be commercialised and is approved for cultivation in the EU, although it has been prohibited in several Member States due to concerns of a risk to biodiversity.


Unlike pesticidal sprays, the Cry1Ab protein is generated continuously throughout the life-cycle of the  GM maize, albeit in different quantities depending on the part of the plant.  Bt levels in the leaves, for example, are much higher than in the kernels.  This creates a variety of exposure scenarios for non-target animals which might eat the maize or its debris in their environment.

Noting that adverse effects from Bt maize consumption have been reported in aquatic non-target organisms, a team of scientists from Brazil and Norway carried out a full-life-cycle experiment on chronic, high-dose dietary exposure to maize-leaf.

Their experimental animal was Daphnia, a tiny shrimp-like aquatic animal which feeds on suspended participate material such as plant debris.  It's used as a model organisms, widely advocated and employed in international standards and protocols for short-term (acute) and long-term (chronic) exposure studies for determining substance toxicity, as well as more general model for studies of genomic, ecological and evolutionary responses.  Its life-span is around 40 days, making it highly suitable for such investigations.

The team found that,  although a reduced life-length and fertility of both GM-fed and non-GM-fed Daphnia suggested maize leaf is a sub-optimal food for these animals, long-term effects indicated harm.  The GM-fed Daphnia displayed a significantly smaller body size from about half-way through their life onwards, and produced about 20% less total offspring. Dormant eggs (a sign of environmental stress, such as pollution or food scarcity) were significantly more likely to be produced by the GM-fed animals.

An inescapable conclusion is that GM maize leaves have either nutritional effects, toxic effects, or both, in Daphnia.

A previous study which fed MON 810 maize kernels to Daphnia found early onset of reproduction and reduced survival.  This was surprising because the Cry1Ab protein is present at a concentration about 30-fold lower in GM kernels compared with the leaves.

These results, together, suggest the Bt protein itself isn't toxic, but that other unintended nutritional or toxic effects may be present at different concentrations in different parts of the GM maize.

Concern was voiced by the authors that, because plants won't generate bacterial proteins, all safety studies on Cry1Ab have been conducted using a purified bacterial version.  Cry1Ab produced by a maize plant is always different, and, in the case of MON 810, there is in fact an extra fragment of a Cry1Ab-related protein being produced.  The unintended bit was found to be more resistant to digestion (a sign of greater toxic potential) and has not been tested for any possible harmful effects.

There's a complexity of nutritional and toxic interactions revealed by this Daphnia experiment which also casts doubt on the safety of the many MON 810 hybrids, in which the Cry1Ab gene has been bred into different genetic backgrounds, none of which have been tested.

The need for each and every GM strain to be safety tested on a true case-by-case basis, using life-long consumption and multiple end-points has never been clearer.

Whatever's in MON 810 maize that's harming the Daphnia could be harming our livestock too.  Eating produce from sickening animals which are killed before the symptoms become obvious is not a healthy option.  Point this out to the Government food safety watch-dogs