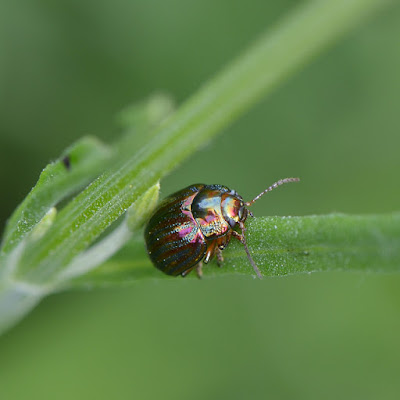 There's no escaping the fact that farming creates pests.  Nature's monocultures, such as the carpet of bluebells in the woods, choose a time and a place where they don't coincide with anything that might eat them, and can make themselves quite impalatable to passing diners.  Cultivated plants aren't so lucky: they have to grow where and when a human being dictates, and becoming a bugs' banquet is an occupational hazard they're not properly equipped to deal with.

In the mid-1900s, synthetic pesticides revolutionised agriculture and crop fields got bigger and bigger.  Farmers' joy was short-lived: pests with resistance to the chemicals weren't long in arriving.  By the 1980s, completely susceptible pests had become uncommon, and new pesticides were thin on the ground.

Then came another revolution in pest control: pesticidal plants which infused themselves from fruit to root with 'Bt' toxin to kill the pests stone dead.

The use of cultured Bacillus thuringiensis ('Bt') bacterial preparations for pest control on crops goes back to 1938.  However, pest resistance to this natural, whole, form of 'Bt' insecticides seems to have emerged only some 50 years later, and then only in a single type of problematic moth.

Since then, isolating specific genes for expressing individual Bt proteins, and adapting them so that plants themselves can express them to kill their key pests, has been a major focus of genetic engineering.

Any similarity between a Bt culture spray, and a single artificial Bt look-alike toxin constantly present throughout the plant is minimal.  It was recognised right from the dawn of Bt-producing crops, that they had an obvious potential to induce resistance in the pests they were supposed to kill.
To address this problem, regulators have mandated the planting of 'refuges' of non-Bt crops where resistant pests won't evolve beside the GM ones so that resistant pests emerging in the Bt crop will be diluted and thus limited.

In models, the 'refuge' scheme works well.  However, a Russian scientist has taken a long, hard look at what happens in the real world, and has concluded that 'pesticidal plants' to protect crops from pests have no future.

One reason is that the refuge reality has more holes in it than a sieve, because over time:

A whole bunch of other environmental factors can make-or-break emerging resistant pests.  Geography (hills, islands etc.) for example profoundly alters the rate of evolution of resistant pests.  The presence of plant pathogens has been shown to accelerate the development of resistance in pests feeding off the infected plant.

Needless to say, the biotech industry realised long ago that the shelf-life of Bt crops was going to be limited.

The next generation of pest-busting GM tactics, heading soon for the fields, is even less predictable than Bt plants.  It looks like we're going to get sprays of 'RNA' designed to interfere with the pests' vital genes, or GM self-destruct pests to drown out the natural population [1].  What havoc these interfering RNAs might wreak, or where they might end up [2], who knows.

A. G. Vikterov, 2015, Can Efficient Insecticidal Plants Be Created or the Evolution of Phyophage Resistance to Commercial Transgenic Bt-Plants, Russian Journal of Plant Physiology 62:1