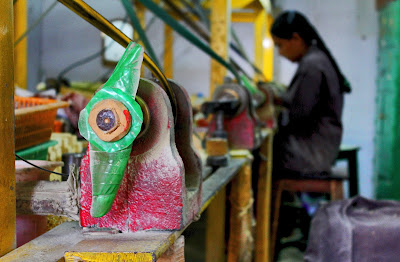 The Legend of the Green Revolution in India

Once upon a time in India, there were too many people and their agriculture was too old-fashioned and burdensome to feed them all.  There was famine in the land, and so many were facing death from starvation that there were fears the people would soon be feeding on each other.

Then came the Green Revolution.  Modern high-yielding wheat and rice which only needed a dab of artificial fertiliser and pesticides to grow just about anywhere.  The foundations of this Revolution lay in crops with short stalks which didn't collapse under the weight of their great big yield.

Thus, a billion lives were saved, Indian peasants were freed from the drudgery of farming, and they all lived happily ever after.

Dwarf wheat hit Indian fields in 1968, and the Revolution years continued until 1976.  During this time, you would expect to see a noticeable step-change in the yield produced and the per capita food-grain* production.  But, interestingly, historical records show an overall increasing trend in both these parameters stretching back to 1952 and extending forward through to 2000.  In fact, the rates of increase of food-grain yield and production slowed during the Green Revolution years.  This doesn't sound like much of a 'revolution', or one which saved anyone from starvation.
*Food-grains include wheat, rice and other cereals.

The Indian Green Revolution actually started in Mexico where the Rockefeller Foundation's 'Mexican Agricultural Programme' set about developing crops to help the country's smallholders.  Somehow, all the Programme achieved was high-input crops which enabled Mexico to export wheat (in addition to the cattle, vegetables, fruit and coffee it was already exporting) while lining the pockets of commercial farmers.   Having apparently failed in their philanthropic purpose, the dwarf crops were then taken to India to try again there.

India didn't have too many people, but they were in the wrong place to service the government's plans.  After over a century under the drain of British colonial rule, India was trying to rebuild itself into a functional state and saw its future in modern industrial output: this meant factories, and non-food crops for export.  To man its new factories and ward of the threat that rural poverty might breed communist insurgency, the Indian government was keen to persuade its peasants off the land and into the cities.

America at that time was only too willing to help India out: at the height of the Cold War with Russia and the hot war in Vietnam, the last thing it wanted was a communist problem in India too.  Also the war in Vietnam was proving increasingly unpopular and the American administration needed some good press.

The US version of the Green Revolution involved a big-is-beautiful, intensified, high-input, highly mechanised, undiversified, agricultural policy.  This Revolution was shored up not so much by success as by legal rights, biological rights (hybrid crops) and government subsidies.  It produced huge uniform harvests which could be sold below the production cost on the global commodity market.  Wheat was one such crop, selling for example at 67% of production cost in 2010.  In the mid-1960s, America had grown so much wheat, it dared not release the excess onto a market whose prices it had already driven down to rock bottom.

Coincidentally, 1966 and 1967 were consecutive drought years in India, and yields of all crops were depressed.  Life was tough for the peasants there, but no one was dying from starvation.

However, the opportunity was too good, it seems, for America to pass by: it announced a famine in India where tens of millions would soon be starving and the people could soon be feeding on each other.  This allowed it to philanthropically offer its embarrassing wheat mountain to save India, and earn some brownie points.

While the Indian government declared the 'famine' a sham and reporters searched in vain for starving peasants to write a story about, the offer of free wheat was too good to miss: it provided  an opportunity to lure the land workers into the factories with the promise of cheap food.

In 1968, the rains returned and a World Bank initiative to install tube wells in agricultural areas in India began to make an impact: all crop yields rose.  Somehow, the Green Revolution dwarf wheat, introduced that same year, got the credit, and the Legend of the Green Revolution was born.

The real-life net effect of India's Green Revolution seems to be an increase of wheat in the people's diet at the expense of traditional protein-rich pulses, and the peasants swapped the drudgery of farming for the drudgery of the factory.  No one was saved from starvation, but in the years to follow at least 3,800 people were killed and many thousands more suffered a premature death in one incident alone, when a pesticide factory sited in an urban area of Bhopal exploded.

Indian non-food crops for export have progressed from jute for America to GM cotton for the global market, while the Green Revolution high-input, one-size-fits-all crop varieties still dominate the agricultural thinking.

The Alternative Legend of the Green Revolution in India

Once upon a time in India, there were too many people working the land to suit their leader’s plans for industrial modernisation.

A country far, far away had developed high-yielding, high-input wheat and rice to save the poor but which was too expensive for the poor and only made the rich richer, so it was sent to India to create a Green Revolution there.

Meanwhile, there was a drought in India.  Another country far, far away, which had foolishly grown too much wheat, used the drought as an excuse to declare a fictional famine in India so that it could offload its excess wheat there. The Indian government cunningly accepted the offer so that it could lure the peasants into its factories with cheap food.

When the drought ended, the crops went back to normal, and the Green Revolution wheat got the credit.  No lives were saved from starvation, but a lot of Indian peasants ended up in cities and factories and some of them were killed there.

If this was just ancient history, it wouldn't matter, but the same narrative of saving the poor and feeding the starving, and the same political conniving is being used to push GM crops into the world, especially into developing countries (for example, see [1]).

Data on like-for-like crops show clearly that yields of GM varieties are no greater than conventional ones, and GM agriculture sustains only the unsustainable high-input, low-diversity model of agriculture fostered by America.

In its rush into modern technology, the safety of its people wasn't in the Indian government's awareness when it allowed a high-risk factory to operate in an area of high population density, and failed to require essential maintenance procedures. The health and environmental damage caused by GM crops and foods won't happen with the horrific suddenness of the Bhopal explosion, it will be a slow-motion train wreck, but could kill and harm many more people now and in future generations.

Let's learn the lesson, not the legend.