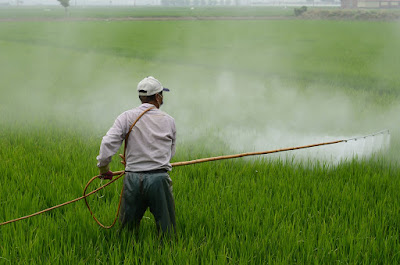 "... having taken every step science can offer to devitalise the soil and its food that supports him, (man) is now turning his attention to destroying the insect world upon which he is also dependent." ... "... if birds eat insects poisoned by (pesticides) this can kill them - a striking tribute to the intelligence of 'scientists', since birds are our best safeguard against pests." (Easterbrook, 1946)

Green MEP, Molly Cato, describes how she has lost count of the times she has debated the "Armageddon" we are inflicting on our environment, only to be met with "patient, patronising smiles" from fellow MEPs and no action.

The quote above comes from a 1946 article and refers to DDT and other contemporary "powerful insecticides of which far too little is yet known". The author goes on to liken those humans intent on spreading pesticides through their own environment to "schoolboys rat-hunting in a munitions dump with a flame thrower".

Note. DDT was the first modern synthetic insecticide. Its insecticidal properties were discovered in 1939 and it was quickly adopted by the military in World War II to protect the troops. The scientists who identified DDT's pesticidal potential won the Nobel prize for it. DDT has been poisoning the world ever since.

Since then, we've had decades of the Green Revolution inflicting chemical after chemical on our world, and now we have GM crops specially designed for greater chemical applications, and even for producing their own.

MEP Cato's recent experiences suggest that the schoolboys with the flamethrowers have never grown up.

The problem isn't just insecticides, albeit they are now widespread on plants, in the soil, coated onto seeds, in the air, and in waterways. Herbicides kill the plants many insects depend on, and artificial fertilizers reduce the plant diversity vital to support insects. All three chemicals damage the plant and insect life of waterways.

Why should the chemical annihilation of all those irritating creeping and flying things, or crop-munching, sap-sucking pests matter?

That's an easy question to answer. First, not only birds but bats, reptiles, amphibians, fish and insects eat insects, and are our biggest safeguard against pests. If their insect food source is taken away, all these animals starve to death and our natural safeguards disappear. Second, insects are vital to decay and the cycling of nutrients: without them our soils and pastures stagnate and our crops and livestock fail to thrive. Third, butterflies, moths, bees and hoverflies are our pollinators, without which we have no fruit, vegetables or legumes.

So, now that we've had eight decades of 'Insectageddon', how are our insects actually faring?

A recent review of 73 ecological studies, mainly in Europe, a lot in America, and a few elsewhere around the globe, "highlights the dreadful state of insect biodiversity in the world". Almost half of insect species are rapidly declining, while a third are threatened with extinction. In Germany's protected areas, shocking 76% decline in flying insect biomass over 27 years has been recorded. Up to 98% biomass loss of ground-foraging and canopy-dwelling arthropods (insects and spiders) over 36 years has been recorded in Puerto Rican rain forests. The UK has suffered the biggest recorded insect fall overall, although this may be because it has been the most intensely studied.

The authors place the blame squarely on the habitat changes and pollution caused by human activity, and identified the main driver of both as the intensification of agriculture with its relentless use of synthetic chemicals. They insist they're not being alarmist:

"We wanted to really wake people up."

Our insects are hurtling down the path the extinction, and we'll soon follow them unless our agriculture moves to organic, agroecological, integrated pest management systems, and farmers re-learn how to use the natural pest control systems they once relied on. None of this will happen unless we break the control that the biotech industry has over our food supply with its quick technical fixes, patents, chemicals, GMOs, and promotion of globalised commodity crops.

The United Nations recognises that the Earth is dangerously sick with millions of people dying each year as environmental problems spiral out of control. It's answer is to change the way we eat and buy food, move to green energy, and stop waste. To do this, we need to take our food and agricultural future out of biotech industry hands and into our own: "an all-hands-on-deck moment".

The Soil Association is lobbying hard for wildlife-friendly farming, and for incentives for farmers to protect wildlife. It needs your support. Check out what the organisation does and all the ways you can support it at: https://www.soilassociation.org/


Image by zefe wu from Pixabay